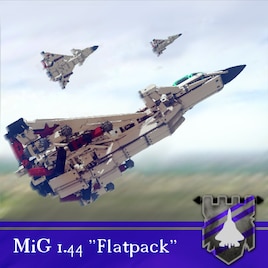 66 items
Description
The MiG was China's multirole fighter for the 21st century, armed with two napalm missiles that could be used effectively against ground targets or locked onto air targets from Command and Conquer Generals.

The Mikoyan Project 1.44 in real life was a technology demonstrator developed by the Mikoyan design bureau. It was the Soviet Union's answer to the U.S.'s Advanced Tactical Fighter incorporating many fifth-generation jet fighter aspects such as advanced avionics, stealth technology, supermaneuverability, and supercruise. It was cancelled in 2000.

This project was originally started in early March (before the Arkbird) but was postponed because the plane is still not fully stable and I have other things to do.

This one can take off in a very short runway like in Command and Conquer Generals. Has 3D thrust vectoring for extra maneuverability, real airbrakes, and armed with four rockets. It also supports mods for fancy afterburner effects.

Thanks to CCCanyon for helping me make the red star insignia with braces.

Note: Mods are just cosmetic effects and not required for the plane to work.