This user has also played as:
Carson 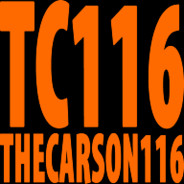 Community Ambassador
200 XP
I am TheCarson116. I make mostly skins for Garry's Mod, along with porting SFM stuff to Gmod. I take skin requests. (unless it's too hard) And I am planning to learn how to make vehicles, props and weapons.

Some things you should know:
#1: I take a VERY dim view of certain things, including swearing, racism, pornography, etc. So therefore, I will not make anything that has any of those things in it. (occassionally I will make exceptions)
#2: I'm not that experienced with creating addons for Garry's Mod. For example, I don't know how to create vehicles or weapon SWEPs. I also don't know how to model or lua code. I DO know how to skin and port stuff from SFM and other Source games.
#3: I work by a policy of "either it gets released to the public, or it doesn't get released at all". So don't even bother asking me to make something private for your server, because the answer will always be NO. I also don't use copyrighted or bought addons, models, skins, or anything of the sort. (Apart from VCMod, but's that for my personal use only)
#4: I will NOT tolerate spamming in any way, shape or form. Lenny and Bob comments will be promptly deleted.
#5: My interests:
Cool music
Garry's Mod (obviously)
Countless movie cars (e.g. Herbie The Love Bug, Christine, KITT, etc)
Disney/Pixar movies (WALL-E, Cars, Toy Story, etc)
Semi trucks and big machines (the latter mostly Caterpillar and John Deere)
Emergency services (police, fire department, EMS, etc.)
Motorsports (Mostly NASCAR, though I do like Formula 1 somewhat)
Pelle Politibil (a 90s Norwegian TV series about a sentient VW Beetle police car and his girlfriend Sally, a Mercedes 230 Ambulance)
There Goes A/Real Wheels
Mighty Machines
Fireman Sam
These last few I've lost interest in in recent years:
Fire Alarms/Electronics
LEGOs
FNAF (Five Nights At Freddy's)
#6: My "hours of operation": (when I'm usually online)
Usually from 3:00 PM until 6:00 PM, then from sometime after 6:00 PM to 10:00 PM during the week. All times are Eastern Standard Time.
#7: I am officially done with Photon. Just thought I'd say that.
#8: For people who don't understand how to apply skins: #1: Spawn the vehicle or prop or whatever you want to apply the skin to #2: Hold C #3: Right-click it #4: Go to Skin #5: Select which skin you want to apply from the menu. Or use the Easy Bodygroup Tool.
#9: For those of you who want to make a request, simply leave a comment, there's no need to friend me JUST so you can request something, unless of course I need further details on it or you want to request it secretly.
#10: I do not discriminate against people based on their religion, race, nationality, what language they speak, etc. I believe in equality for everyone.
View more info
Currently Offline
Badges  5

Fernández Lucho Apr 22 @ 7:22pm
Hello,
would you be available to install vcmod main and vcmod ELS on vehicles?
Have a good evening.

Soldier Jan 3 @ 12:19pm
Hey just adding you so what you want me to fix from my latest addon.