This user has also played as:
Emile Torvald/Lex/Khan/Hunter/Assassin Main, will steal all your Top Plays. 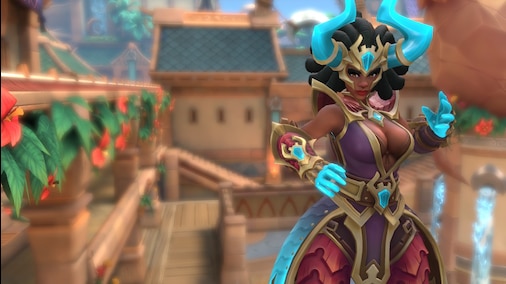 Paladins
2,759 Hours played
With the devs now releasing new content in a monthly basis, this game has a lot of potential. Here are some reasons why:
1-Its free to play, with optional microtransactions and DLC. The paid content is pretty good but not too good to make the game pay to win. They have a NO-P2W philosophy.
2-Its not so heavy in resources. It could run in most toasters/microwaves.
3-The card decks and items systems. Every champion has a pre-built deck that you can use in game, but you can collect more cards to build better decks. These cards will grant a small boost to your abilities, its up to you which ones you will use and how to arrange them. Talents are the ultimate power, these ones will grant you a huge buff to your abilities or yourself but only one can be active in a match so choose carefully. Before a round starts and while respawning, you can buy items to enhance your performance as well. The items are quite simple and universal, but they'll help you a lot in the late game. Items can be bought and upgraded with credits, credits can be earned by doing any significant action in game.
4-Its heavily supported by e-Sports. Paladins is becoming quite popular lastly, everybody wants a piece of It.
5-Without the ability to swap characters/classes mid-game, a feature that most games in this genre have, Paladins brings a whole new different meta based on thoughtful decisions to make hard counters.
6-Everybody gets a chance to get cosmetics by playing with the new Battle Pass system, however if you decide to go through the Premium path you'll get even more goodies.
7-Cross-play is now available for all platforms, and cross-progression as well (PS4 will get cross-progression later on).

There are still few downsides tho, which I'll mention now.
-There are still quite a few bugs and issues, but the dev team is working hard to fix them.
-They will no longer support XP/Vista by 2019, so you better upgrade.

So in conclusion, if you like games like this, you should def play it. However if you are not a Big fan of bugs and stuff, you may have to wait until its polished in most parts, probably in 2019.

P.S. they have horses that you can use to reach the objective, a nice touch imo.
View all 5 comments
Badge Collector