This user has also played as:
Joey Capparelli Mannifest Destiny
500 XP
Apparently the bio has a character limit. I'm not going to bother retyping the rest, as it is effort that could be used elsewhere, like personally talking with others about this. For those who are disturbed as to why I didn't just sell/give away any of my items (because this part was taken out of the bio), because that would defeat the purpose of what I'm trying to accomplish. Read this for info http://forums.backpack.tf/index.php?/topic/50760-big-backpack-guy-shot-down-by-vac/
View more info
Currently Offline
1 VAC ban on record | Info
1974 day(s) since last ban
Badges  22

1,536
Items Owned
The VAC ban
If you are wondering about the TF2 VAC ban, its was an INTENTIONAL decision. I would have easily used an alternate account if I wanted to hack just to piss other people off. I'm actually glad this happened; and here is why. Some things need to be said beforehand so this all makes sense, so I'll try to be brief in each story chunk:

Since 2011ish, things have been slowly going down the ♥♥♥♥♥♥♥ in the life of JCapps. Before the downfall though, I picked up TF2 in 2009 when the first halloween update came out and introduced the gibus. No, it was not on this account, but another. That was midway in the period of time when new weapons besides the defaults were being made. Consistant updates really appealed to me since everything was always fresh . I usually was hanging around achievement/idle servers, tf2ware servers, dodgeball servers, and all those other goofy fun modded servers. I barely played on maps that was a PvP objective because I don't like failing or losing . I partially don't like winning either since someone else has to lose. So what did I do? I would spend most of my time running around achievement servers killing bots and spamming pootis, because there are no losers there. Everyone wins.

When the manncostore update came out (which introduced keys and such), thats when things got reeaally interesting for me since 1) Almost all my items turned vintage 2) You could traaaaaaade 3) Fancy shmancy particle effect hats! At this point I pretty much developed a need to be a collector of stuff . Long story short, I eventually traded up to an unusual in about 2 years, with being scammed out of some of my items on the way. It was an orbiting fire Pugilist's Protector; nothing special in general, but it was special to me because it was a personal goal that I completed . Joyfully showing off my new hat, the unexpected happened...I was VAC banned...for absolutely no reason.

I did not hack at all on that account and I had my first ever unusual removed, so I of course complained to valve. VAC bans as you know are irreversable, so nothing happened. TF2 was the insta-relief game for me, so this got me good. I never thought I'd ever get an unusual or a fancy item again if I started from scratch, so I gave up TF2...aaaaand jumped into a new account a few weeks later (this one). The game was too fun to quit, with all the new mechanics and such, like bosses, even more new weapons, and new voice lines that I'd never get tired of.

Eventually, I was motivated enough to run my own server for awhile, and even make my own maps for it! It was quite loved by many, and to this day some people still want me to reboot my server . Why I took the server down is mildly irrelevant to the story behind this account's VAC, but I just needed to mention it for later use. There is a reason why some things are being underlined, which I will also explain later.

Aside TF2, this was the beginning of the decay of my life. Not because of TF2, but for personal reasons. But with that, having more fancy stuff in TF2 seemed to destress me, after all, I did aquire the collector's craze. There were a few keys moments during this backpack building time period: 1) I've grown the distaste for not just scammers, but sharkers, phishers and price manipulators and anyone greedy as well. I would turn full Phoenix Wright whenever someone tried to pull a yoink on me or one of my friends. 2) I learned that I actually feel bad for making a profit . I actually feel bad for getting a good deal because someone else gets a worse end of the deal. I end up buying things rather than trading this to avoid this. 3) I developed an understanding of why people do certain things . This sudden blast of willingness to hear what people have to say derived from this: http://forums.backpack.tf/index.php?/topic/8051-somewhat-intellectual-conversation-with-a-phisher-rare/ . I was surprised I actually got him to talk with me. Reading this again right now still hits home, as the current USA presidential candidate who supports more affordable college plans is losing the race to corruption (No, I did not complete college). Do i support scamming? Absolutely not. But i get it .

Fast forwarding ALOT, I set my sights on a gold pan and eventually got one by paying with items. It was a massive overpay, but it was worth it. Finally having a gold pan was the biggest highlight in my life. I had a blast with that thing. I already had a houwar at the time, so i took the name of Lord Demopan since i friggen loved the idea of demopans. Everything was great. I got what I wanted...in TF2...not in my life outside of TF2. Again, more ugly personal things kept stacking up. Being the introvertive person that I am really didn't help with these issues.

I had to make my sets even shinier. How? Well, a sunbeams misc would look nice so my houwar would look glowy. I ended up getting a sunbeams brainiac for engi. It looked sweet as hell....But what about demopan? There is no demoman misc is there? *gasp* What if I got a shiny ALL-CLASS sunbeams misc? I did just that. I spent $3500 on a sunbeams polar pullover that monkey had. He ended up being able to pay of some bills, so that made me happy. BUT! *gasp* What if I glitched professional killstreak kits on all of his stuff too? *gasp* WhatifIhadaustraliumsforeveryonesoTHEYCANBESHINIER*gasp* WHATIFBECAMETHEGUYWITHTHEMOSTEXPENSIVEBACKPACK -
...

...Luckily, I realised that it was TF2 that has been applying stress, not relieving it. TF2 was no longer friendly fun, but a struggle to the unreachable.

Look back at everything that was underlined. With all these new gimiks like contracts and upgradable badges, you know I need to reach the highest with everything. If i didn't, in my mind, I'd fail a goal that was "achieveable" since I could buy my way in effortlessly. I wanted this more because of my failure to reboot my server that everyone loved since. I haven't gotten to that after mentioning i'd put it back up after like 5 years since my motivational levels to do anything are at an all-time low. Not wanting to profit from my server didn't help it either. Monthly payments and such disgust me. I'd rather just pay for something once and use it, which is exactly how my server ran. I gave out admin for a few keys, and small perks per server visit were a weapon each. No vip system at all. Everyone loved the way it worked. It even attracted other popular groups and suggested a partnership. They even offered to host my server for me so pings were better. But the stress was too strong. I was demotivated because I was scared that I wouldn't be able to pay off the monthly fee of their server hosting. I was afraid that my regulars would scram once they heard of the new system the server providers had for me.

In a quick summary : I consistanly feel awful when on TF2 for 1) not providing fun to those who just want to have fun, 2) not having the best of the best backpack, because my brain registers it as a complete failure if it isn't, and 3) dumping my money into the game and hoping everything turns out better

So, I sort of recently (comparatively to multiple years) decided to find a way to stop all this, because frankly saying "I quit" isn't going to stop me from coming back. I had to do something to prevent me from trading. The first thought, coming from the ♥♥♥♥ side of my brain, was to just start scamming. Yea, there's no way in HELL I'm doing that. The next thought was..."what if i just get VAC'd?" That way no one else gets hurt in the process. However, I also had one last goal, and that was to get a burning team captain. It was the "I win TF2" hat after all.

So, I appeased the ♥♥♥♥ side of my brain and the good side
Workshop Showcase 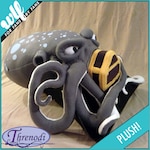 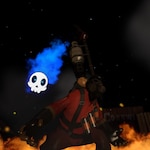 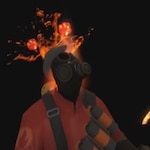 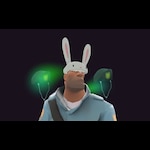 Vibe Aug 29 @ 6:28pm
he's still getting the +reps lmfao also he should do a video on him scrapping the expensive items and deleting the scrap as such as he'll make money at least