This user has also played as:
Oculus Rift Reviews Recommended 3D Vision Games
77 Members
Lawyer & Game Reviewer & Guitarist
Yes, I am a lawyer. I don't have any commitments outside of work and I don't have many hobbies outside of playing guitar and playing games. I hardly ever watch TV. When I'm not working, I focus on trying to build up my curated reviews. I don't have any agenda other than writing reviews as accurate as possible from the Oculus Rift with Touch controllers perspective, now also sometimes from the Windows Mixed Reality perspective. Please check out my curated group below and follow. Thanks!

And here is my Top 100 List of FREE VR Steam Games (feel free to suggest games I may have missed, although there were several that just didn't make the cut that I've had to delete from the list because there are just too many good free ones now): https://store.steampowered.com/curator/32244664-Oculus-Rift-Reviews/list/29492 Hellblade: Senua's Sacrifice VR Edition
9.7 Hours played
Experienced on the Oculus Rift with Xbox One Controller. Spoiler-free Review.
An absolutely stunning achievement in VR and a must experience. Ninja Theory's port of this game into VR proves that you don't need roomscale to achieve an immersive gaming experience. The use of sound, direction, and amazing use of color and light bring you into this gaming world until you feel the inner torture within Senua's mind.

Game ran smoothly on my GTX 1060, so you definitely don't need to meet the minimum GTX 1080 requirements. I think I may have noticed some slight pop-in at times, but it was barely noticeable. Most of the time, your view is offset behind Senua, third person view. During cinematic scenes, the game will automatically cut to a movie theatre cinematic view of the action (like looking at a flat curved screen). Despite the cutscenes, this is one of the most beautiful games in VR and one of the most intriguing worlds you can experience. The only thing better is the sounds.

The use of sound is really where this game sets itself apart from the vast majority of games. This is proof that in VR, sound is almost just as important as the visuals. You want presence in a game world? Then get good sound engineers to work on your games. In this game, you get a full spectrum of sound to achieve the range of emotions and mental battles going on inside anyone who has experienced trauma or is experiencing a traumatic event, mixed with self-doubt & agony.

The combat was good, but it's not Dark Souls good. There seems to be a slight delay at times. Also, (on default difficulty) it doesn't get semi-challenging until after defeating the first boss. If you die, part of your body turns to rot. If you rot your mind then it's game over and you have to restart the game. However, it's really hard to die during the trash. And for boss fights, the rule doesn't apply and you can continue retrying the boss. The puzzles are really where you can die believe it or not. In fact, my one and only death** you do have to die sometimes so I'm not counting those so far has been because I didn't realize I had to get going and was looking around. I was not a fan of the puzzles in the first boss areas, especially the first one because you're not given much direction on what you're supposed to be doing. In fact, there is no tutorial and you for the most part have to figure stuff out on your own, which I thought was weird for a AAA title (even Dark Souls had the read me signs on the ground).

I do recommend changing some of the default options in VR. First of all, change the snap turning to continuous. Turn off 180 full turns as well (by pressing back on the right joystick). And for heaven's sake, please turn off headset steering. Who in their right mind would want that as a default control?

I got this game on sale for $16.07 USD and that was quite a steal. I think this game is worth the full price of admission. This game is 6-10 hours long. Set it on hard if you find combat too easy.

Rate 8.5/10. Only reason I don't give a 9 is because the puzzles weren't very statisfying.
View all 4 comments
Screenshot Showcase 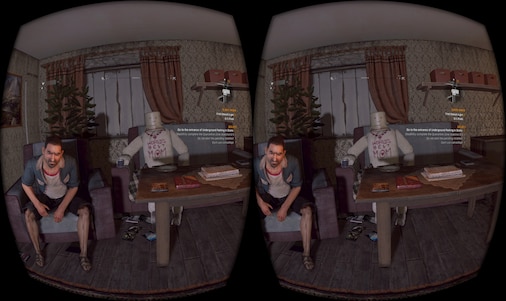