Store Page
ARK: Survival Evolved>  Workshop > Meedas's Workshop > Ultra Stacks > Discussions
This item has been removed from the community because it violates Steam Community & Content Guidelines. It is only visible to you. If you believe your item has been removed by mistake, please contact Steam Support.
This item is incompatible with ARK: Survival Evolved. Please see the instructions page for reasons why this item might not work within ARK: Survival Evolved.
Current visibility: Hidden
This item will only be visible to you, admins, and anyone marked as a creator.
Current visibility: Friends-only
This item will only be visible in searches to you, your friends, and admins.
Ultra Stacks
Description Discussions16 Comments1649 Change Notes 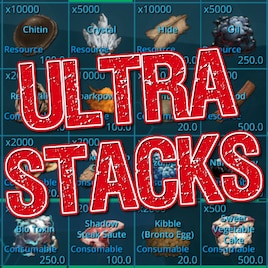 Want to join the discussion? You need to sign in or create an account.
Date Posted: Sep 10, 2016 @ 3:21pm
Posts: 0
Start a New Discussion
Discussions Rules and Guidelines
More discussions

2
Switch to Ultra Stacks from Stack+ without loosing items?

Removed Sweet Veggie Cakes from the stack mod (reset back to vanilla).

Added all non-fertizlied eggs as stackable

Version 1.61
Fixed an issue that prevented Charge Battery and Charge Lantern engrams from being learned properly.

Added Kibble (Iguanodon Egg), Kibble (Ichthyornis Egg), and Tek Grenades as stackable. Please note that the Tek Grenades will require you to relearn the engram if you have already learned this engram before the update.

Version 1.42
Fixed an issue with Beer Jars not being consumable. Now everyone can get drunk again. XD (Thanks to ḎȐȪǍȻȪƝ & -LAG- Stingaree for reporting this issue).

Added the Lasso as a stackable item.

Also added the following recipes as stackable due to user demand:

Version 1.12
Fixed an engram bug with the small bear traps (thanks Azhalvek)

Version 1.1
The following items from Scorched Earth are now included as stackable:

Fixed bug with Angler Gel not using proper fire animation when added to the standing torch and wall torch.

For established servers, please remember to relearn your engrams for the changes to take affect.

Version 1.05
Due to a limitation within ARK which caused a bug with the stacking of dyes, I had to remove the dyes from the stacking mod. It seems that dyes are currently hardcoded in the game and cannot be altered. If you try to alter the dyes, it will prevent the dyes from working with paint brushes and sprays. Removing the dyes from Ultra Stacks is the only solution to fix the issue. Paint brushes and sprays will work normally again after you apply this update. I am sorry for the inconvenience. Thanks for reporting this bug Spanish Inquisition.

Version 1.04
Fixed a bug related to to the crafting of Bug Repellent (thanks for confirming DovahkiIT™).

Version 1.02
Fixed a bug that prevented the mod from loading properly in certain situations.

Version 1.01
Minor update to remove an item that was not suppose to be included as stackable.