Store Page
Divinity: Original Sin Enhanced Edition>  Workshop > SniperHF's Workshop > Four Character Creation > Discussions
This item has been removed from the community because it violates Steam Community & Content Guidelines. It is only visible to you. If you believe your item has been removed by mistake, please contact Steam Support.
This item is incompatible with Divinity: Original Sin Enhanced Edition. Please see the instructions page for reasons why this item might not work within Divinity: Original Sin Enhanced Edition.
Current visibility: Hidden
This item will only be visible to you, admins, and anyone marked as a creator.
Current visibility: Friends-only
This item will only be visible in searches to you, your friends, and admins.
Four Character Creation
Description Discussions3 Comments375 Change Notes 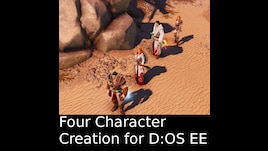 Want to join the discussion? You need to sign in or create an account.
Date Posted: Apr 7, 2016 @ 6:45am
Posts: 12
Start a New Discussion
Discussions Rules and Guidelines
More discussions

Apr 7, 2016 @ 6:45am
Known bugs / Workaround
There are some NPC's that bug out the mod and can ruin your save, one of these is the dialog bug. As far as I'm aware there's no way the author can fix this as it's engine based rather than the mod.
The NPC's that "bug" the game are what I call "Force Encounters". Force encounter's are when palyers get to a certain area and a random NPC forces the closest player into conversation. Because players 3 & 4 are companions, there's a bug where they can't end the conversation or move / do anything.

There are 2 ways to avoid these "Force Encounters" destroying your save...

1 - Save frequently, so if it does happen, you can just revert back to a save instead of going to the last autosave, which could lose you 30+ minutes of gameplay you just done.

2 - Get Player 1 or 2 to trigger these "Force Encounters" before player 3 or 4 goes near them and the problem won't happen.

Below will list the "Force Encounters" I have found so far that cause the dialog bug to happen...

- The Ground Floor of the "Cooks House" in Cyseal.

- The Fish Stand In the market area / center of Cyseal.

- The Beggar over in the East of Cyseal.


As far as I'm aware, this bug isn't an issue after youn reach the Hall Of Heroes and should prevent any "Force Encounters" breaking the save/game...
< >
Showing 1-12 of 12 comments

SniperHF
View Profile View Posts
[developer] Apr 7, 2016 @ 2:01pm
Out of curiosity, did you start your game on another version of the mod? Because I think I fixed these dialog issues yesterday in the lattest version. Unfortunately old saved games don't get the fix.
#1

Normaly I press F5 every once in a while and load the game from there if something happens - no problems here.

Do you recomend that I now should keep on saving many different saves (different files) manually istead of using this one F5 slot?
#3

Apr 27, 2016 @ 6:11pm
No, only those 3 encounters i mentioned in the first comment causes an issue until you unlock the "hall of heroes" part. after that there is 0 issues and no need to worry :)

The only time I make a "different save file" is when we stop playing at the end of the day, just to make sure my singleplayer autosave doesn't overwrite the 4 player autosaves :)
#4

Is this intended or another mod issue?
#7

Apr 7, 2018 @ 1:48pm
Hey, any known reason as for why the second pair of characters won't pop up for character creation? After creating the first two, I just get plopped down into Cyseal.
#9

Apr 10, 2018 @ 9:40pm
Are "player 3 and 4" just supposed to be glorified minions? because they don't comment for me, and if they're off on their own they don't follow eachother, nor are they able to complete an area on their own (for example I made them go off and do the tutorial mission while the other two walked off, not possible, after a while they can no longer interact with anything.)
#11