Store Page
Don't Starve Together>  Workshop > K1NGT1GER609's Workshop > S.T.A.L.K.E.R. faction pack > Discussions
This item has been removed from the community because it violates Steam Community & Content Guidelines. It is only visible to you. If you believe your item has been removed by mistake, please contact Steam Support.
This item is incompatible with Don't Starve Together. Please see the instructions page for reasons why this item might not work within Don't Starve Together.
Current visibility: Hidden
This item will only be visible to you, admins, and anyone marked as a creator.
Current visibility: Friends-only
This item will only be visible in searches to you, your friends, and admins.
S.T.A.L.K.E.R. faction pack
Description Discussions9 Comments143 Change Notes 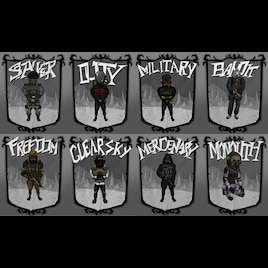 Want to join the discussion? You need to sign in or create an account.
Date Posted: Nov 4, 2016 @ 4:45pm
Posts: 4
Start a New Discussion
Discussions Rules and Guidelines
More discussions

K1NGT1GER609
View Profile View Posts
[developer] Nov 4, 2016 @ 4:45pm
AI guide
Stalker! This feature of the stalker mod is completely experimental and will most likely cause a crash as my previous AI I experimented with had numerious bugs I could never replicate. From this point forward your on your own if a bug occurs. This mod has faction companions that will follow and serve you till either you die, they die, you log out, go into a cave or you attack them. They can chop down the trees, mine rocks, dig stuff, hammer stuff, try to hide(prototype) with you, get you out of the spat's mucus, fight with you and attack enemies on sight including rival factions members (including other players in the rival faction). To recruit one give them a gold nugget, flint, rocks, nitre and other elemental food and you're set. You can only recruit AI that are in your own faction so if you pay another faction member they'll just take the material. Each AI is armed with a weapon of their preference, are heavily armored as you, flammable depending on suit, waterproof depending on suit, and drop loot on death. Though they're suppose to be Companions as fighting one is a bad idea, fighting multiple will lead you to your death and armor being destroyed. Here's a faction relationship if you decide to have them fight each other:

Monolith: Neutral: none. Hostile: all factions that aren't in theirs.

Bandits: Neutral: mercenary. Hostile: All stalkers not in their faction.

Other easter eggs include all stalkers are recruitable to certain modded characters. AI will not attack webber on sight, wilson with a spider hat and Neutrals with spider hats. Ai can also wear hats if you give them one, Ai also have some reactions when you do certain tasks (gives them a bit of character). AI are neutral with beefalo so mating season will be less of a problem. Wearing a badge of truce keeps you from being shot on SIGHT if you just want to see them battle each other and other none stalker players from being shot as well. Freedom and monolith seva characters are armed with sniper rifles and shoot every 3 seconds. Stalker's vision depends on the gun their wielding.

The more actions mod helps in jumping over walls as ai act as a inmoveable object and is optional.

K1NGT1GER609
View Profile View Posts
[developer] Jan 17, 2018 @ 9:46pm
@Lexbomb6464
Well there were some errors in some of the weapons and in one ai. I assume you don't know that the admin/host is the main person who can spawn items (or use the console) correctly, if your not the host/admin you'll spawn items that are...cosmetic. By cosmetic I mean it just looks like the item but it isn't the item, it also applies to regular items so I can't do anything about that.
P.S I don't know if more than one admin can use the console correctly, I rarely play the game at times.
Last edited by K1NGT1GER609; Jan 17, 2018 @ 9:48pm
#2

K1NGT1GER609
View Profile View Posts
[developer] Nov 1, 2019 @ 8:50am
@Kekscommander
They're only spawnable by console commands at the moment as I haven't fully tested them out on servers (where crashes are recorded in a different location and are more unusual errors to say the least), and I failed to have them spawn in the world generation.
#4
< >
Showing 1-4 of 4 comments
Per page: 15 30 50