Store Page
Cities: Skylines>  Workshop > FretfulShrimp's Workshop > Traffic++ > Discussions
This item has been removed from the community because it violates Steam Community & Content Guidelines. It is only visible to you. If you believe your item has been removed by mistake, please contact Steam Support.
This item is incompatible with Cities: Skylines. Please see the instructions page for reasons why this item might not work within Cities: Skylines.
Current visibility: Hidden
This item will only be visible to you, admins, and anyone marked as a creator.
Current visibility: Friends-only
This item will only be visible in searches to you, your friends, and admins.
Traffic++
Description Discussions135 Comments2462 Change Notes 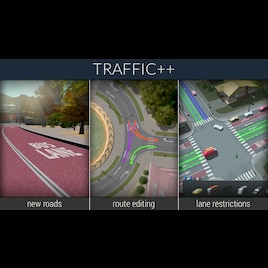 Want to join the discussion? You need to sign in or create an account.
Date Posted: May 3, 2015 @ 1:28am
Posts: 47
Start a New Discussion
Discussions Rules and Guidelines
More discussions

2
A compatible mod like this for the newest version for Cities:Skylines?

May 3, 2015 @ 1:28am
Tutorial: Lane Changer (intersection editor)
Note: The RC button has been moved out to the main toolbar (over near policies button) and is now a small car with a speed sign behind it. Will update this guide after taking some new screen shots. In the meantime, see this: http://i.imgur.com/JoyEAxd.png
Note for Traffic Manager Users
If you've been using the Lane Changer in Traffic Manager, this is the Traffic++ equivalent.

If you're new to Traffic++ you'll probably have to enable the Traffic++ lane changer, which is part of the Road Customisation Tool. For more information, see the FAQ.

Overview
An introduction to the basics of customising lane routes at intersections...

Intersections are formed wherever two or more roads join together. By default, traffic from one lane will be able to drive to any of the 'exit' lanes at the intersection, and this can lead to chaos with cars cutting across each other's paths. I had a small roundabout facing just this problem every time a wave of cargo trucks were caused by deliveries to a nearby train station...

Tip: It helps to pause the game when there's a lull in traffic so you can get a clearer view of the roads when editing.

1. Select the intersection
Click the car icon that appears at the end of the main toolbar - this enables road customisation mode.

Hover the mouse over an intersection and you'll see a blue circle appear indicating that you can edit it....

Note: The colours are random.

3. Target lanes
Let's get some traffic on to the roundabout; left-click the orange circle (source). You'll get a line of the same colour that follows the mouse around, and applicable 'target' lanes (where traffic can leave the intersection) will now get little circles on them...

There's two applicable targets for our orange source - the pink and green circles. Move the mouse over each of them in turn and left-click to place a route.

Note: Left-clicking a second time will remove the route.

4. Repeat...
Right-click once to go back to the 'source' mode (where all source lanes are indicated) and then left-click on the next source you want to route.

In my case, I wanted traffic to always use the outermost roundabout lane when exiting the roundabout...

The only lane we've not yet customised is the inner-most lane (purple) on the roundabout. Here's what I did:

I set up all the other junctions on the roundabout the same way. It means that traffic leaving the roundabout has to get to the outer lane at the previous intersection, which frees up the inner lane for traffic that's wanting to go further round, which in turn means far less traffic on the outer lane where new traffic is entering.

The sat nav doesn't update immediately :P Drivers plan their routes when starting their next journey. If they're already on the road they will continue to use their old route.

You can either wait (what, patience?!) and they'll update themselves, or if you're also using Traffic Manager mod you can Despawn Vehicles to clear away existing traffic (all new traffic will know about your customisations).

What if I want to revert to default lane routing?

Simply remove all the coloured lines (select a source, then click it's current destinations to remove the lines from them; then right-click and repeat until there are no lines left).

What happens to source lanes that have no target?

Currently if you don't set a target for a source lane, the game will default to allowing any of the applicable targets for that source to be used just like normal.

What happens if I do something wrong?

What are the common mistakes?

Think about lane restrictions. For example, if you route a bus-only lane to a cargo-only lane, you're going to get problems because busses can't go on cargo-only lanes.
Last edited by aubergine18; May 27, 2015 @ 9:02am
< >
Showing 1-15 of 47 comments

May 4, 2015 @ 1:36am
@jfarias, would it be worth using different shapes for source and destination points? Currently both use circles, and this is confusing to explain because they both look the same. Maybe if the destination points were triangles facing away (in same direction as road they are on) from the intersection? That way when you connect routes to them it looks like arrows pointing the direction of traffic.
#4

Originally posted by aubergine18:
@jfarias, would it be worth using different shapes for source and destination points? Currently both use circles, and this is confusing to explain because they both look the same. Maybe if the destination points were triangles facing away (in same direction as road they are on) from the intersection? That way when you connect routes to them it looks like arrows pointing the direction of traffic.

I'm not sure I can do triangles - I'll see how they are drawn in bus/metro lines, maybe I can use those - but I know I can draw quads.
But would you want them to be seen at all times or keep it separated by source and destination as it is (so destination is only seen when a source is clicked)?
#5

May 4, 2015 @ 4:01am
I kind of like how it works currently, that destinations only appear when you've selected a source. From perspective of explaining the different stages of route editing, I just think it would be easier if the destination and source markers were different shapes.
#6

Originally posted by aubergine18:
I kind of like how it works currently, that destinations only appear when you've selected a source. From perspective of explaining the different stages of route editing, I just think it would be easier if the destination and source markers were different shapes.

Ok. I also like that they are only visible when they can be selected. I'll see about shapes for next week's update.
#7

May 8, 2015 @ 12:58pm
I've added an FAQ to the tutorial above that lists all common things that might stop RC button appearing. I've just made a mistake myself that stoppped the button showing, which was that I had temporarily enabled "Ghost Mode" to try out traffic manager and I'd forgotton to turn off Ghost Mode.
#9

May 15, 2015 @ 6:04pm
This is a great Idea. Once I get a few practices in, I should have this down. Now all we need is a more realistic AI for the emergency vehicles to be able to make their way to said emergencies w/o having to wait in traffic jams, but rather, use the (mostly) empty left lane to get to the intersection and make their turn (or forward), while traffic is at a stand still. Know anything of a sort going on?
#10

May 15, 2015 @ 6:29pm
Well, Soda is updating a lot of the vehicle AIs for his "ARIS" mod (search ARIS in the workshop and you'll find the Hearse and Garbage Truck ones, more coming soon). However, in terms of traffic jam avoidance we're waiting to see what CO do in the next patch (the one where they're adding tunnels, etc..) as we expect they'll make some changes to the pathfinding. If they don't sort out stuff like that, then it's definitely something that we could do, we just don't want to make sure they're not going to do it first.

In the interim, you can set vehicle restrictions, for example to give emergency services their own roads or cause them to take alternate routes...
#11

Originally posted by KimJongUn:
There's no RC button, I can send you a picture if you like.

I'm having the same. The mod roads are all there, but the RC button is not to be found.
#12

The road customiser button should then appear as a small yellow car icon near the end of the main toolbar on the right-hand side (we had to move it out of the roads menu).
#13

The road customiser button should then appear as a small yellow car icon near the end of the main toolbar on the right-hand side (we had to move it out of the roads menu).

Jun 7, 2015 @ 6:44pm
Your implementation of this is way better than Traffic Manager's. Thanks to the fine control you give over which lane goes where, I can now build proper rotary junctions where traffic actually adheres to the lane-use rules we have in New England.