Store Page
Cities: Skylines >  Workshop > Viocra's Workshop
This item has been removed from the community because it violates Steam Community & Content Guidelines. It is only visible to you. If you believe your item has been removed by mistake, please contact Steam Support.
This item is incompatible with Cities: Skylines. Please see the instructions page for reasons why this item might not work within Cities: Skylines.
Current visibility: Hidden
This item will only be visible to you, admins, and anyone marked as a creator.
Current visibility: Friends-only
This item will only be visible in searches to you, your friends, and admins. 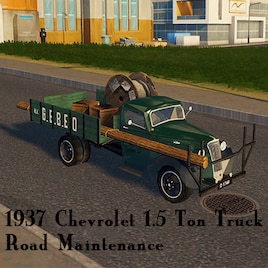 Viocra
Online
See all 55 collections (some may be hidden)
You need DLC to use this item.

This item has been added to your Subscriptions. Some games will require you to relaunch them before the item will be downloaded.
Description
NV. GEBEO's 1937 Chevrolet 1.5T Truck
A maintenance truck used by NV. GEBEO (Gemeenschappelijk Electriciteitsbedrijf Bandoeng en Omstreken), a company that distribute electricity in Bandung and it's surrounding area. It carries a cable spool, some logs that were being used as a pole, and others support equipment.

The spool model taken from Cable Spool Props by Spence!

The original model of cable spool is from Cable Reels[sketchfab.com] was released under a Creative Commons Attribution license[creativecommons.org] by Sketchfab user Lassi Kaukonen. Full credit and thanks to them for making their work freely available!