Store Page
Stellaris >  Workshop > corsairmarks's Workshop
This item has been removed from the community because it violates Steam Community & Content Guidelines. It is only visible to you. If you believe your item has been removed by mistake, please contact Steam Support.
This item is incompatible with Stellaris. Please see the instructions page for reasons why this item might not work within Stellaris.
Current visibility: Hidden
This item will only be visible to you, admins, and anyone marked as a creator.
Current visibility: Friends-only
This item will only be visible in searches to you, your friends, and admins. 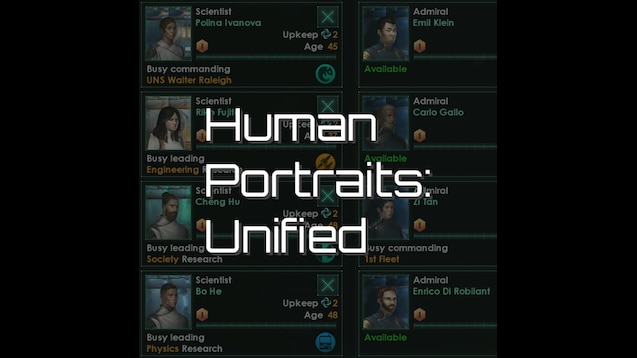 corsairmarks
Offline
See all 3 collections (some may be hidden)

This item has been added to your Subscriptions. Some games will require you to relaunch them before the item will be downloaded.
Description
Overview
You didn't ask for it and you probably hate it already! I've combined the new and old human portraits into two unified portrait sets. What's the difference you ask? The human portrait group (which appears first in species selection) puts each new portrait before the matching legacy portrait, while the human_legacy portrait group (appears second in appearance selection) puts each legacy portrait before the matching new portrait.

This mod overwrites two files from the Stellaris game:
If anyone who understands working with Stellaris meshes reads this - I think the "issue" is that the legacy human mesh has its content closer to the origin, thus making the legacy humans appear shorter. The actual texture files are the same dimensions and (whn viewed with a graphics editor) approximately the same height at the shoulder. If anyone would like to help me adjust the legacy human meshes, I would appreciate it. I would like to give them similar "height" to the new portraits, which should be possible because the bottom of their graphics are already cut off in the game display.

Compatibility
Built for Stellaris 3.4 "Cepheus." Yes, this is achievement compatible and can be added or removed from your game at any time.

Will not work with other portrait mods that also edit the 07_portraits_human.txt file, but should work with mods that add clothing or hair to the legacy human portraits.