Store Page
Stellaris >  Workshop > pearl's Workshop
This item has been removed from the community because it violates Steam Community & Content Guidelines. It is only visible to you. If you believe your item has been removed by mistake, please contact Steam Support.
This item is incompatible with Stellaris. Please see the instructions page for reasons why this item might not work within Stellaris.
Current visibility: Hidden
This item will only be visible to you, admins, and anyone marked as a creator.
Current visibility: Friends-only
This item will only be visible in searches to you, your friends, and admins. 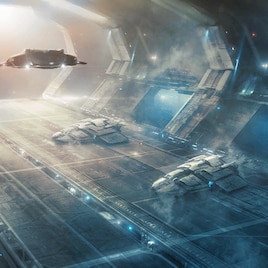 pearl
Offline
See all 360 collections (some may be hidden)

This item has been added to your Subscriptions. Some games will require you to relaunch them before the item will be downloaded.
Description
Adds Fighters, Interceptors, Railpods, Bombers, Gunships, and Gatlings. Reworks Strike Craft combat completely, adds new strategic depth to carriers, and makes space battles more interesting.

Strike Craft are now an essential part to every fleet. Fight for tactical control over the battle with a variety of space superiority fighters, and support them with crucial carrier operations using devastating strategic bombers.

Railpods - 3.45 sec (+50% shield bonus) - 425 speed
Railpods are nimble and armed with powerful miniaturized railguns to overwhelm the shields of ships.

Strategic Bombers
Designed to decimate capital ships of various sizes and hold their own in Strike Craft combat. Requires support to be fully effective, but given time, these assault craft can decimate enemy fleets.

New Carrier Ship Sections
Cruisers are now your dedicated carriers. New ship sections for cruisers have been added to help them reflect this new role in the fleet. Standard hangars (starbases, defense platforms, or other ship sizes like battleships) have access to all six types of Strike Craft.

General Changes
All hangars now launch their strike craft quickly and from long-range (200) at the start of the battle, which can then speed up ahead of their main fleets to fight for space superiority before the main fleets clash. Strike Craft combat behavior and all other stats related to them have been reworked completely in this mod.

Cruisers have been redesigned to become dedicated carriers armed with hangars, missiles, and point defense slots. Cruiser carriers allow for power projection across the galaxy and are effective damage dealers, but are also quite expensive and fragile. Protect your carriers well, and their Strike Craft will decimate the enemy fleets.

There are three tiers to Strike Craft technology in this mod (Basic, Improved, Advanced). There is also a new admiral trait (Ex-Fighter Pilot) added in this mod, it gives +10% strike craft damage and attack speed.

Credits go to Chickenhunt for the projectile GFX and Churumiru ShiRoZ for helping me make the icons.
< >
86 Comments

AeonRemnant Jun 24 @ 7:23pm
@pearl It's not so much about the strength of the equipment rather than the role playing possibilities. Having the bombers max out right at the beginning of the game kinda ruins the long game, but if we had new classes it'd feel much more immersive. :D

Good mod tho, carriers are underrated.

pearl  [author] Jun 24 @ 5:33pm
@AeonRemnant tier 3 (advanced) of these strike craft should already be stronger than ESC Next versions

AeonRemnant Jun 21 @ 10:34pm
Would it be possible to get some compatibility with ESC Next? There's a LOT of different bombers in different mods. Psionic bombers, singularity bombers, nanite bombers, etc etc. It hurts that this mod is relevant up until year 60 and then pointless after.

BOYETCHLES Jun 19 @ 2:05pm
Ok so I love the idea of this mod, strike craft in vanilla are pretty boring and not very powerful. With that said, I played a game with this mod and it is WAY overtuned. I went to war with my neighbor whom was weaker than me, however he had cruisers (and therefore strike craft) and I didn't. He wiped the floor with me in every fleet engagement we had. I would have 1-2k more fleet power (5-6k vs 4k) and my fleets would be devastated with him taking minimal losses because the strike craft are so strong. I tried maxing out PDCs and it didn't make much of a difference. I tried disabling the mod and reloading the save and his fleet of 4 cruisers and 1 destroyer went from 4.7k power to 1.1k power.

Unfortunately this is just far too imbalanced at the moment. Please look into turning down the strength of the flight craft. I look forward to trying it again after that time.

DisasterAhead Jun 18 @ 3:51am
Oh cool, thanks Faber. I guess I missed it when I read through the mod description.

Faber Roze Jun 18 @ 1:57am
Has anyone tried this mod with Guilli's Ship Components yet? Planning to test the compatibility soon, would be super helpful if there are known incompatibilities/bugs.

And yes, I'm using both because I'm a carrier-nut.

DisasterAhead Jun 17 @ 5:10pm
Is this compatible with NSC?