Store Page
Stellaris >  Workshop > Komandante's Workshop
This item has been removed from the community because it violates Steam Community & Content Guidelines. It is only visible to you. If you believe your item has been removed by mistake, please contact Steam Support.
This item is incompatible with Stellaris. Please see the instructions page for reasons why this item might not work within Stellaris.
Current visibility: Hidden
This item will only be visible to you, admins, and anyone marked as a creator.
Current visibility: Friends-only
This item will only be visible in searches to you, your friends, and admins. 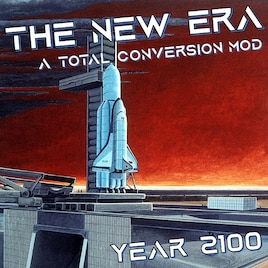 Komandante
Online
See all 127 collections (some may be hidden)

This item has been added to your Subscriptions. Some games will require you to relaunch them before the item will be downloaded.
Description
The New Era
This mod is a completely update-independent project. The new era is about the full conversion of stellaris, which means it has alternative mechanics to vanilla. Also in the mod there is no compatibility with other mods. You should play on version 3.1.2, since it was she who was taken as the basis for the mod and its updates.

This mod completely changes every aspect of the vanilla game. There is a completely new technology tree nailed down from scratch, an adequate system of job financing, a new battle, and so on. This mod involves the transformation of stellaris into something more realistic and adequate than the "D*ck" update in vanilla. In the process of its development, we are slowly but inevitably moving towards a utopian dream, the dream of stellaris for 300 playable years. This mod simulates the development of the galaxy over eras. You start out as a primitive to go through 3 ages and become a great Galactic empire.

Eras in mod:
In this mod:
Popular Discussions View All (3)

Some tips on not dying too early
shadofx
< >
344 Comments

Willem Jun 27 @ 1:35pm
So, great mod, like to see where this one goes... though question: Was this inspired by Aurora 4X by any chance?

x26a Jun 27 @ 1:30pm
My neighboring empire is not growing, has anyone had this problem?

MrRafa365 Jun 24 @ 9:23pm
for all i played i can say the mod still needs work seems like the ia cant play it so its u alone and theres some jump drives like the second tier of hyper drive that will lose all your ships

Dragon's Flame Jun 23 @ 9:22am
@Mazurek just bypass it, it should give you the option to "subscribe anyway" and then sub to the other one

Can we get rid of the loop, or even combine the two mods into one so we are not dealing with this unnecessary amount of headache?