Store Page
Stellaris>  Workshop > Ambit's Workshop
This item has been removed from the community because it violates Steam Community & Content Guidelines. It is only visible to you. If you believe your item has been removed by mistake, please contact Steam Support.
This item is incompatible with Stellaris. Please see the instructions page for reasons why this item might not work within Stellaris.
Current visibility: Hidden
This item will only be visible to you, admins, and anyone marked as a creator.
Current visibility: Friends-only
This item will only be visible in searches to you, your friends, and admins. 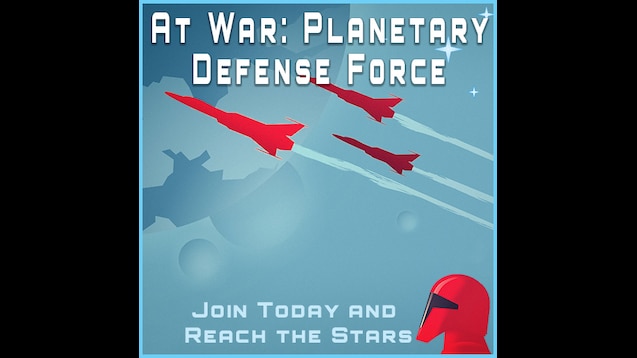 This item has been added to your Subscriptions. Some games will require you to relaunch them before the item will be downloaded.
In 1 collection by Ambit
At War Continued

7 items
Description
This mod is a continuation of the original, created by The Dadinator, and now updated and maintained following his expression to discontinue support.

This mod may be removed if he returns to the modding community and wishes it taken down to consolidate effort.

Features
Planetary Defense Force Base
Patrol Craft
Fleet Behavior
Known Limitations
The Patrol Craft ship designs show up in the fleet designer even though they cannot be built by starbase shipyards. I haven’t found a way to hide it there yet make it available in the ship designer.

Max Jun 15 @ 11:20am
Is there any chance for a compatibility patch with Guillie's ship components or Upper Limit?

Ambit  [author] Jun 11 @ 4:33am
@rayden_solo gonna test out some settings. Join the discord to keep up to date.

rayden_solo Jun 10 @ 3:32pm
with the 3.0 penalties to pop growth we will see less patrol crafts than before, maybe the number can be increased a bit?
also, what are message types?

CursedAuroran Jun 10 @ 12:54pm
@BurningTemplar
1- unlikely and even if it does, it wont do it well
2- anything slows down the game, if it does so noticeably is another question I cannot answer

Ambit  [author] Jun 4 @ 7:32am
@Peter34 I just updated it today to 3.0.3 and only looked into the parts that were not compatible. gonna look in to that the next few days. when i have time for that.