Store Page
Stellaris>  Workshop > Omega's Workshop
This item has been removed from the community because it violates Steam Community & Content Guidelines. It is only visible to you. If you believe your item has been removed by mistake, please contact Steam Support.
This item is incompatible with Stellaris. Please see the instructions page for reasons why this item might not work within Stellaris.
Current visibility: Hidden
This item will only be visible to you, admins, and anyone marked as a creator.
Current visibility: Friends-only
This item will only be visible in searches to you, your friends, and admins. 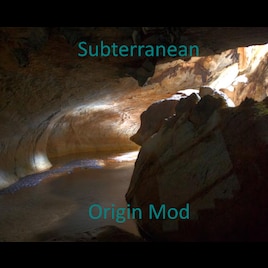 Omega
Offline
See all 29 collections (some may be hidden)

This item has been added to your Subscriptions. Some games will require you to relaunch them before the item will be downloaded.
Description
Subterranean Origin Mod that was submitted for the #MODJAM2020.

This mod's origin mechanics are heavily based around planet modifiers. You start out with a planet with a rank V subterranean modifier that gives +25 housing, +10 max districts, +15% Engineering Research from jobs, and -15% Orbital Bombardment Damage. Additionally, you start with the technology to "build" subterranean habitation on other worlds. This is done through a chain of 5 planetary decisions that progressively provide an increased planetary modifier. It starts out by giving +5 housing and +2 max districts at rank I and ramps up from there. Each stage takes 5 years to complete; which means to reach rank V on a planet it will take 25 game years.

Omega  [author] 1 hour ago
@Aftrshock98 No DLCs are required for this mod to function. Though I highly recommend all of the DLCs for this game. Personally wouldn't go without any of them.

@Sentry Ward Pure bugfixes are being pushed directly to the MODJAM version (as well as this version). This mod will be expanding on what was done in the MODJAM mod. If using this mod, then you will want it to be below the MODJAM mod in load order.

Sentry Ward 17 hours ago
Does this (will) include any bugfixes in original MODJAM? Do I need to add this and load after MODJAM to override original one?

Tyrgalon Jan 13 @ 1:05am
This sounds pretty cool, looking forward to trying it when the new version comes out :)

Omega  [author] Jan 10 @ 8:43pm
@Jimmy @kirshnak, Thank you both for the input, this has been very helpful. I'm testing a few things and should be ready to push out an update within the next couple of days.

kirshnak Jan 10 @ 6:55am
Personally i would change the job from the building to give 1 of each research plus a mineral. Lower the Alloy upkeep to 1 and 0 for liths,

Make the upgraded building a requirement but remove/reduce the gas/alloy upkeep.

Lower the cost/time for the decision to level. Remove the mastery_of_nature requirement for the AP but make it require 2 AP’s first.

Remove/reduce the engineering boost from the planetary buff. And here it comes: Replace that part of the buff with a little bit of habitability/amenities/stability bonus and eventually a extra building slot or 2 (this way you can play around with what you do and do not want to keep, it will compensate all your sacrifises and thus feels extremely rewarding).

I believe this also adresses Jimmy’s things while also keeping the mods base intact while fixing most of the balance issues. And if you want help i can do all of this and more. (damned 1000 tokens max).

Jimmy Jan 9 @ 3:46pm
I like the idea of the Speleology Facility being replaced by a civic. It means I can have my system capital tech by the time I have titan construction by having a research lab instead of the engineering only research. It does present a mechanics hazard when it is swapped out in mid-game after all the sub-surface digging is done that is tricky to balance. Maybe mark it permanent/unchangeable like inward perfection or fanatical/devouring/exterminator?

It also suggests maybe a troglodyte civic that adds the habitability boost for an agoraphobic society. Or possibly a parallel decision to the storage caverns decision?

I have all the alloys (minerals and food too) I can use even with one forge per three worlds. The problem is managing 150-200 population and matching climate preferences for happiness and the game seeming to pick the arctic population next because it is underrepresented on my arid colony.

Omega  [author] Jan 9 @ 3:14pm
I'm throwing around the idea of adding a Subterranean civic that would give a Speleologist job per 25 pops along with +Mineral output from jobs. I could then use that civic as an alternative to requiring the Speleology Facility on all planets for the purpose of running the Subterranean decisions. Thoughts?

Omega  [author] Jan 9 @ 3:06pm
@kirshnak is that with a Gestalt empire or a regular empire? Based upon this feedback I've added +1 alloys from jobs on the second tier Subterranean technology. I have also removed the restriction for Fanatic Purifiers and Devouring Swarms. They can now use this origin. I can tweak further as needed.

I am mostly thinking of the several rotations I spent in 'hardened' underground facilities and hearing about the blizzards I missed from the gate guards when my rotation ended.

Game mechanic wise I do note that transforming seems a long slog away in the games I played since the spielology centers seem to eat the few slots I can afford for research buildings. When teraforming finally arrives to research I am sinking lots of energy into the subterranean projects so it is still expensive to teraform climates when I finally do get the technology.

20% free habitability may be a bit excessive but I spend so much of my mid game trying to juggle population and most of my economy on enforcers and amenities that I do not seem to be able to keep up with my excavations much less my fleet or technology, even with a superior economy.
< >