Store Page
Stellaris>  Workshop > Smithy's Workshop
This item has been removed from the community because it violates Steam Community & Content Guidelines. It is only visible to you. If you believe your item has been removed by mistake, please contact Steam Support.
This item is incompatible with Stellaris. Please see the instructions page for reasons why this item might not work within Stellaris.
Current visibility: Hidden
This item will only be visible to you, admins, and anyone marked as a creator.
Current visibility: Friends-only
This item will only be visible in searches to you, your friends, and admins. 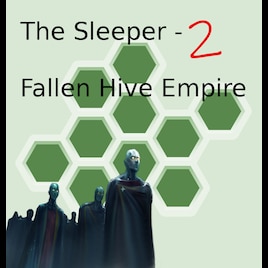 Smithy
Online
See all 23 collections (some may be hidden)
You need DLC to use this item.

This item has been added to your Subscriptions. Some games will require you to relaunch them before the item will be downloaded.
Description
The Sleeper 2 - Fallen Hive Empire
This mod adds a new fallen empire to the game, refered to as the sleeper. This ancient hivemind used to be great threat to all live in the galaxy, but for unknown reasons it has collapsed and fallen into a deep slumber. Its once tireless drones are now only barely controlled by its will and its presence on the galactic stage has been diminished. How will this looming threat effect the younger nations?

This is the second version of this mod. Huge parts of the code have been rewritten and many new things have been added.

A quick overview of features:
The sleeper is much like a normal FE, but with a twist. It has its own unique mechanics and interactions with the galaxy. This mod adds new events, galactic resolutions, a new mid-game crisis, techs, traits, two new colossus weapons and many new scenarios to the game:

- At the start of the game, the sleeper is... well, asleep. It can only barely hold onto its many drones. You can not engage with it diplomatically and it will attack anybody who dares to enter its borders. You are free to snoop around though.
- There is a science station above its capital - a research AI has taken up residence and it can tell you more about the sleeper. And it is always looking for some helping hands/talons/fins/tentacles/any other acceptable equivalent
- Apart from its two main systems, most of the sleepers territory can easily be taken by the lesser empires without (immediate) repercussions. So if you want those valuable systems, go ahead. Just be mindfull to not cause to much disturbance...
- Certain actions or events in the galaxy will rouse the sleeper (such as taking its systems, attacking its fleets, galactic crisises, etc.). If roused to much, it will be driven into a frenzy, violently invading everything around it with hordes of cheap, rushed fleets, until it falls back to sleep out of exhaustion or is killed. The research AI will warn you should the sleeper come close to becoming feral. This will be either a huge risk to your empire, or may represent an interesting opportunity to deal with rivals and snatch some systems...
- like any other fallen empire, the sleeper can awake again and try to restore its former glory. The awakened sleeper will try to exterminate all robot, synth and hivemind empires, while subjugating the rest for food and cattle.
- defeating the sleeper will get you unique rewards!
-the mod also comes with easy to use debugtools/cheats.

Compatibility:
The following vanilla files had to be overwritten to make this mod possible:

Any other mod that replaces them may break something. The following compatability patches are available:
- Bombardment fix by Inny - a must have if you are running this with a bunch of other mods.
- !! AI restricted systems patch by Inny - also a must have, since the AI will attack the sleeper when it does not make sense for them to do so if this is overwritten.
- ACOT: Override "patch" makes the sleeper stronger to keep up with the stuff added in ACOT

Planned features:
(no promises though:))
- A new origin that makes you spawn next to the sleeper. Think of lovecrafts theory why we have not encountered aliens yet.
- a special rival for the sleeper: a pacifist FE

if you want to contribute to the mod, feel free to visit it on github[github.com]!

Other mods made by me:
The Planetbuilders
Dyson Swarm - Colonizing Space
Resettlement Tool
Popular Discussions View All (2)

PINNED: Bugreports and other issues
Smithy

๖ۣۜTheodorex Oct 12 @ 12:36am
The attacked the sleepers opinion modifier stacks to -1000 and +1000, leading to a weird situation where the other empires just ignore the attacks, instead of liking or hating them.

Smithy  [author] Sep 30 @ 7:42am
well, looks like I will have to bring back that starting message that checks if the sleeper spawned lol

Darian Stephens Sep 30 @ 7:34am
With just a few isolated systems unexplored now, I think it's reasonably safe to say that the Sleeper didn't spawn in our galaxy.
A shame, but there's always next time.

Smithy  [author] Sep 30 @ 4:46am
It is guaranteed now, although I did get a bug report that it did not spawn recently. You may want to check by going into observer mode and see if it is there.

Darian Stephens Sep 29 @ 4:15pm
Is it guaranteed to spawn if you have the mod enabled this time?
I haven't encountered it by midgame yet, but there is a small section of the galaxy that has yet to be uncovered which it might be hiding in.

Smithy  [author] Sep 29 @ 11:04am
Mainly the starsystems it spawns with and the feral awakening, as well as some other minor stuff. I put a full list in the discussion tab.