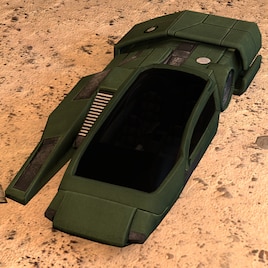 Kally
Offline
See all 874 collections (some may be hidden)

This item has been added to your Subscriptions. Some games will require you to relaunch them before the item will be downloaded.
Description
THESE ARE PROPS.

The Aircar from Mass Effect 3. Includes ordinary Aircar and police/C-Sec cruiser. Both models have bodygrouped doors and displays inside. The roof, door, and seats are joint tool compatible.

Ordinary car has six skins (Red/Yellow/Grey + All of those without engine lights) and the grey skin is compatible with the color tool so you can make them whatever color you want. PLEASE NOTE: Due to the way the color feature works, the interior displays will look awkward when colored and this is unavoidable. Either turn the displays off via bodygroup or simply ignore it when using this feature.

Police car has four skins (C-Sec/Generic Police + Both of those without engine lights.) and lightbar with on/off/removed bodygroups.

Credits:
Bioware - Original models and textures.
Kali - Porting, adding bodygroups, rigging, and making the color tool compatible textures.
Haxxer/Wasp - Anything from his original Aircar i might've re-used for this.

The Aircar was ported a long time ago back when Haxxer and I did the Mass Effect vehicles pack, but after we had finished it the Omega DLC for Mass Effect 3 was released which contained an aircar with a far better interior and some better textures, so i decided to re-port it to add the nicer interior and some minor improvements.

The screenshots are all made on gm_black with lots of props and lamps. They're not maps.
< >
23 Comments

Mr FoldingChair Mar 15, 2016 @ 6:11pm
Is there by any chance you could make the emplacement gun from the mass effect series?