Store Page
Stellaris>  Workshop > MrFunEGUY's Workshop
This item has been removed from the community because it violates Steam Community & Content Guidelines. It is only visible to you. If you believe your item has been removed by mistake, please contact Steam Support.
This item is incompatible with Stellaris. Please see the instructions page for reasons why this item might not work within Stellaris.
Current visibility: Hidden
This item will only be visible to you, admins, and anyone marked as a creator.
Current visibility: Friends-only
This item will only be visible in searches to you, your friends, and admins. 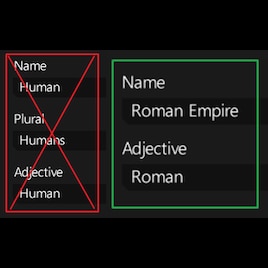 This item has been added to your Subscriptions. Some games will require you to relaunch them before the item will be downloaded.
In 1 collection by MrFunEGUY
Multiplayer w/ Friends

194 items
Description
I'll be away until August 23rd. No support will be given until then.
This mod is intended to change most diplomatic text - and every other other instance where it makes sense - from calling you by your founding species name to instead calling your nation's demonym.

I really hated that I would always be called 'Human.' It seemed really undiplomatic to me, especially when your empire has multiple species. Mechanical empires, as well as some certain AI types, along with other appropriate lines, will still use species names.

Biggest downside is there there is no way to implement a plural form (if you notice in the pic above, we for some reason don't get a plural option for country demonym). Because of that, I recommend using a demonym that works for both the singular and plural.

I did all of the changes manually, reading the context to determine if it should be the demonym or species name. If you feel there are places where it should be changed, let me know.

Support:
Just make sure this mod is after any of these mods in your load order:

This mod only changes some base game localisation files, so it should be compatible with just about everything. Only case where it won't be is if other mods also change the localisation files I changed, but that's fairly uncommon.

Urist Warbeard May 5 @ 1:52pm
that was before. i must have missed the update. Ignore me while i die of shame.

Urist Warbeard May 5 @ 11:56am
Oh. Industrial District text is missing/broken, as are several diplomatic incidents, among other things when this mod is active. I'm not sure how districts are related to this mod but a night of troubleshooting brought me to eliminating this one from my current list and solving my problem.

MrFunEGUY  [author] May 5 @ 9:51am
Not exactly sure what you mean by broken localisation, but no problem.

Urist Warbeard May 5 @ 9:48am
Thanks for your hard work! I was actually about to leave a comment about the broken localization, but you're way ahead of me.

MrFunEGUY  [author] Apr 15 @ 2:19pm
I'll be updating this within the week for the new localisations added by Nemesis.