Store Page
Hearts of Iron IV>  Workshop > stefffff's Workshop
This item has been removed from the community because it violates Steam Community & Content Guidelines. It is only visible to you. If you believe your item has been removed by mistake, please contact Steam Support.
This item is incompatible with Hearts of Iron IV. Please see the instructions page for reasons why this item might not work within Hearts of Iron IV.
Current visibility: Hidden
This item will only be visible to you, admins, and anyone marked as a creator.
Current visibility: Friends-only
This item will only be visible in searches to you, your friends, and admins. 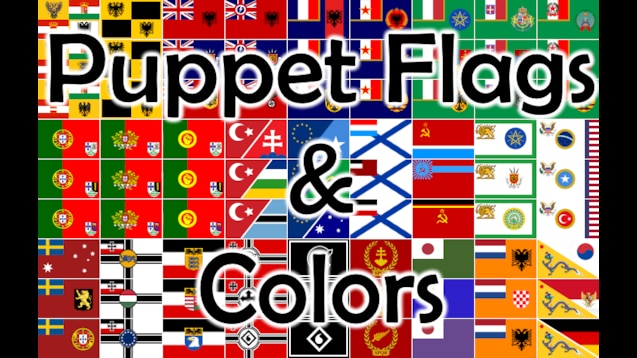 stefffff
Offline
See all 82 collections (some may be hidden)

This item has been added to your Subscriptions. Some games will require you to relaunch them before the item will be downloaded.
Description
Puppet Flags & Colors
Please rate and comment

Hello and guten Tag to my reuploaded version of my Puppet Flags &Colors Mod.

Some Notes
well the purpose of this mod is very simple. You can change (via decision) the flags, the name and the color of your Puppets as following nations:

some flags are not finished and will simple dont have a symbol on their flag
SS flags and all russian ones should be complete tho.


you can also join my discord, to make suggestion and send me bug-reports:
https://discord.gg/Y3ZK3vc
< >
62 Comments

『NOVA』 9 hours ago
Lol, Albania as a British puppet.

Valkyria Feb 17 @ 12:31pm
Can I suggest (if it's not already suggested or in the works) the Imperial Federation for this mod?

DisThingSux Feb 16 @ 4:31am
Can the USA democratic flags be copied to USA fascist, as they also would fit.

Xlep Feb 16 @ 4:07am
for example german reich. the puppets should be have a similar color to germany but with the original flags :)

Xlep Feb 16 @ 4:02am
can you create a sub mod only with color chance...because historical flags :) that would be very nice

小Nún Feb 15 @ 7:55am
I wonder if u can offer a non-rename version....Something like "only flag & color changes"
I mean your work is brilliant, but it bothers in some languages.

Milogray Feb 13 @ 3:10pm
Guys it says in the description they are working on Poland China and Spain, Be patient.

TheOriginalCuckold Feb 12 @ 8:41am
any chance you could get the Imperial Federation working with this mod? Idk if it already does, but if not i'd like it to
< >