Store Page
Darkest Dungeon®>  Workshop > Empress Cirilla's Workshop
This item has been removed from the community because it violates Steam Community & Content Guidelines. It is only visible to you. If you believe your item has been removed by mistake, please contact Steam Support.
This item is incompatible with Darkest Dungeon®. Please see the instructions page for reasons why this item might not work within Darkest Dungeon®.
Current visibility: Hidden
This item will only be visible to you, admins, and anyone marked as a creator.
Current visibility: Friends-only
This item will only be visible in searches to you, your friends, and admins. 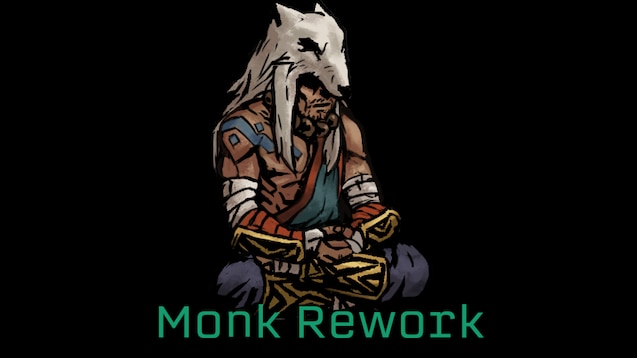 Darkest Dungeon®: The Shieldbreaker
Created by

Empress Cirilla
Offline
See all 30 collections (some may be hidden)
You need DLC to use this item.

This item has been added to your Subscriptions. Some games will require you to relaunch them before the item will be downloaded.
Description
This mod reworks Hellintz's popular Monk class mod. In my opinion, it is one of the most beautifully designed classes, but is unfortunately quite overpowered. Changes have been made to enhance the Monk in a more flavourful 'spiritual' manner as opposed to his current feeling as brute force, hyperdamage/hyperhealer nature, but also to assist in reworking the class to be more versatile. The focus of this rework is that the Monk is now initially, a relatively weak and slow character that progressively becomes a hyper-agile, speedy and damaging warrior, or alternatively, a versatile frontline healer that can protect others and avoid damage himself with his agility, depending on how he is built.

Changes
Base stats nerfed (HP, SPD, DMG). Slightly lower HP to increase risk to how the Monk has to be played and built. SPD nerf was intended because Monk was too fast, now has skill to buff its speed over battle. Slight DMG nerf.

Dragon Tail now provides %DMG increase to other skills instead of %CRIT, to compliment other skill's negative %DMG modifiers (swapped with Howling Fist).

Howling Fist now provides %CRIT increase to other skills instead of %DMG, to compliment other skill's low %CRIT modifiers (swapped with Dragon Tail). All healing effects and healing interactions with other skills are removed from this skill. -PROT debuff on target.

Sweeping Kick is unchanged. The Monk's stun ability is in a good place utility wise. It is meant to compliment other abilities by providing slight DMG and CRIT buff.

Spirit Block replaces Transfer. The Monk uses his ethereal spirit to quickly block incoming damage towards a single ally. Guard one ally, +1 Aegis block for Monk, heals a percentage of target HP whilst the Monk takes some damage. Higher levels in this skill provide slight DOT healing to the Monk to mitigate some of the damage taken. Can only be used if Monk is over 25% HP.

Mantram heals party besides Monk himself. Healing numbers slightly reduced from vanilla Monk. No longer provides +% PROT partywide or -%DMG to Monk. CRIT bonus reduced significantly. Now provides DODGE to Monk. Removed heal on next hit guarantee. This was considered the Monk's most overpowered ability and a rework/nerf was needed.

Builds
The rework is intended to generate three viable but balanced builds for the monk besides just being a super damage dealer and burst healer:

Compatibility
Must disable Hellintz's vanilla Monk mod for this to work. Compatible with all other Monk non-class mods (such as Hard-earned Districts e.t.c.).

Hope you guys enjoy my rework, please let me know any thoughts on the matter. I have experimented with this rework for Lvl 0 to Lvl 6 with a range of different builds and parties and feel it is in a good, respectable place right now without feeling too overpowered.

Based off Hellintz's mod: https://steamcommunity.com/sharedfiles/filedetails/?id=1442225067
All credits and rights reserved to original uploader.

Tamercillo 22 hours ago
i think the dodge bonus are broken , buf dodge for any target , its intended or a bug ?
sorry for my english

Artic Mar 28 @ 12:51pm
Only for info. There is a bug in the naming of the class and other habilities.

Enlonwhite Feb 12 @ 10:10am
I cant say the monk was overpowered on everything in original mod, but two play styles/trinket combos definitely were OP. (I mean mass healling with auto crit, with good damage on one style?)

however I did like the feel of the class in the original feel of how the class felt, I dont know if i want to divert from that. If your mod is diverting from the way he felt before (not talking numbers here just how approach the class feel)

Still I will give this a shot, who knows maybe I will like the changes more.

ayy Jan 17 @ 4:41pm
Is Mantram intended to give 30 dodge, instead of the listed 10 dodge? If it is/isn't intended, I'm guessing it just procs 10 dodge per party member healed

Saber One Jan 5 @ 9:29pm
I imagine using your rework instead of the original will remove any current monk I have from the roster? I just want to confirm that before I do it up. I definitely have been feeling like the monk makes things a bit too easy, but I love his playstyle in my dancing party.

Sir Toine Nov 20, 2019 @ 3:59am
thank you. monk was one of my favorite class but i had to stop using it cause it made some runs way too easy.
defintely gonna try this cheers