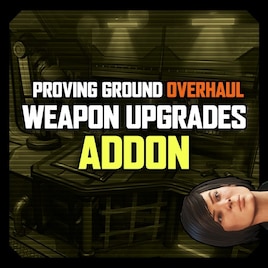 Hotl3looded
Offline
See all 964 collections (some may be hidden)
You need DLC to use this item.

This item has been added to your Subscriptions. Some games will require you to relaunch them before the item will be downloaded.
Description
OVERVIEW
This mod adds new Proving Ground projects to unlock weapon upgrades in the Engineering Bay. I made this mod as an addon for my Proving Ground Overhaul mod but it can also be used as a standalone mod.

FEATURES
All project times/costs and item costs/resell values can be edited in the config file (you can add or remove anything, even corpses).
This mod acts as an Elerium Core sink. There are 21 new projects. This means you will need 21 Elerium Cores to unlock all superior weapon upgrades (unless you change the default project costs). So choose carefully which upgrades you want to unlock first.

The configuration file should be in the following location:
<Your Steam Install> \steamapps\workshop\content\268500\1378527184\Config\XComPGOWeaponUpgradesAddon.ini
COMPATIBILITY
This mod should be compatible with almost any mod.

It should be safe to add mid campaign.

CREDITS
I'd like to thank the following persons:
Popular Discussions View All (2)

Zwitter Feb 24 @ 11:19am
does this conflict with a better repeater?

Sandvich Dispenser Nov 6, 2019 @ 3:19pm
Yeah, totes would be nice if there was a suppressor version (the previous guy put a link to the their mod)

Masterman Jul 10, 2019 @ 6:03am
Does this interfere with Tactical Suppressors? They all got changed back to repeaters

DragonKnightXCX Jun 21, 2019 @ 7:59pm
Does anyone know how to add new items to this mod? I would like to add the Black Hole Generator Weapon and the Sub Sonic Grenades; but I have failed at configuring it. Has anyone succeeded at this or know how to?

Lebowskichild Jun 19, 2019 @ 5:56am
Would this work with Weapon Upgrades Expanded WotC?

If I load it afterwards there would be no issues, correct?

Kuhler Män Jun 17, 2019 @ 8:03am
Got it wrong, didn't know you had to produce everything in order to get better attachments only got basics thus I was confused
< >