XCOM 2>  Workshop > Kyuubicle's Workshop
This item has been removed from the community because it violates Steam Community & Content Guidelines. It is only visible to you. If you believe your item has been removed by mistake, please contact Steam Support.
This item is incompatible with XCOM 2. Please see the instructions page for reasons why this item might not work within XCOM 2.
Current visibility: Hidden
This item will only be visible to you, admins, and anyone marked as a creator.
Current visibility: Friends-only
This item will only be visible in searches to you, your friends, and admins. 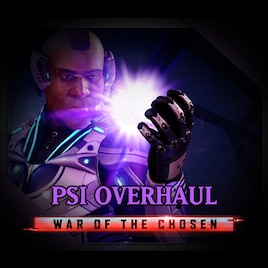 XCOM 2: War of the Chosen
Required items
This item requires all of the following other items
X2WOTCCommunityHighlander
Created by

Kyuubicle
Offline
See all 1115 collections (some may be hidden)
You need DLC to use this item.

This item has been added to your Subscriptions. Some games will require you to relaunch them before the item will be downloaded.
Description
NOTE:
Some users have reported that the Chosen Avenger Assault mission sometimes breaks with this mod. I don't know why or how (nor do I have the time to investigate), but be aware of this issue may crop up for your game. I've also been told that temporarily removing Quick Soldier Info (the mod that adds the UI headshots/soldier selection to the tactical UI) before playing the mission can also fix the issue.

NOTE 2:
You can add this to an ongoing game, but if you already built the PsiLab, you *will* need to destroy it and rebuild it. Console commands are your best bet to fix it without wasting time/resources in game.

NOTICE:
This is an update to/reupload of Ziodyne's XCOM Psi Overhaul to fix some Highlander compatibility issues and perhaps some additional changes over time. The previous version will remain on the Workshop for those that don't use the Highlander but will not be updated!

[KNOWN ISSUES]
-'Continue Training' button on the Finished Training pop up doesn't work
-Cancelling training and re-entering training will give a different list of abilities
-Not having the option to view all Psi Abilities enabled will not display correctly for soldiers with Higher level abilities.
-Sometimes animations for the PSI abilities just... don't happen.

[ACTUAL DESCRIPTION BELOW]
==[XCOM 2 PSI OVERHAUL: PSION WITHIN]==
Bringing back psions, XCOM 1 style. No longer do you train psionic operatives as test tube rookies - upon building a psi lab (or visiting a built psi lab for the first time after this mod is installed), any of your operatives can test positive for psionic potential and learn psionic abilities.

Are you ready for a chain-grappling Skirmisher that can hurl Null Lances? Does your blademaster want to dominate a Berserker to fight alongside him? Why not add Void Rift to your GREMLIN-user's skill rotations?

[HOW THIS WORKS]
- Play normally, leveling up your operatives through missions.
- Some of your operatives will be revealed to be secretly psionically gifted!
- Throw them in the psi lab and they'll become psions.
- Learn psionic abilities alongside regular leveling!
- ???
- Profit!

[IMPORTANT NOTICES]
- Here's how it works: Whenever you enter the Psi Lab, the game will check if each of your units have rolled to become a psion yet. If they haven't, they get to roll the roulette!
- Every time you rank up as a psion, you'll get randomized amounts of psi. To rank up as a psion, you also need to have the requisite soldier rank, so don't forget to keep sending them out on missions!
- Psions replace base game Psi Operatives, as the Psi Lab has been completely repurposed. They are not strictly better per se, as they can only learn a limited number of psi skills, but those skills are added on top of your existing trooper's abilities.
- Psions do not need to use Psi Amps. Psi Amps can be equipped for the +Psi bonus and Psi skills scale off your psi stat - as it increases, your psi attacks will do more damage. On average, a fully ranked Psion will be a bit stronger than a maxed Psi Operative in terms of damaging psi powers.
- This uses default game configured Psi-training times - head to XComLatentPsionics.ini to configure everything else

[COMPATIBILITY]
- OVERRIDES: XCom_HeadquartersPsiTraining. So Psi Lab will likely be broken if you remove this mid-campaign.
- BYE-BYE: Psi Operatives. Can no longer be trained or created, check your character pools if you use the force my class mod.
- WARNING: This mod creates Utility-Slot Psi-Amps, so you should disable (or not-enable) any mods that create Utility-Slot Sidearms from creating their own Psi-Amps.
- COMPATIBLE: Detailed Soldier Lists. Technically not required actually, but psi stat is otherwise not viewable on the main armory roster list.
- INCOMPATIBLE: Reportedly, Disable Random Posters mod and this mod conflict and cause crashing. I've not been able to replicate this, but I'm listing it here in case anyone else is experiencing crashes with the mod enabled.
- INCOMPATIBLE: Kv's Invisible Psi Amps. Which is really strange to me considering that I'm literally giving everyone a psi amp, and using the fact that the game doesn't render the psi amp I gave them to... give invisible psi amps to people.
- This will work with any class, any weapons, any whatevers. People using custom psionic classes - as long as the custom class doesn't require training in the psi lab, this should peacefully coexist alongside such classes.

[THANKS]
Ziodyne for creating 95% of the mod in the first place :V
Many thanks to Pavonis Studios for the brilliant ideas that sparked the creation of this mod, and -bg- who went out of his way to update his Detailed Soldier List mod.
Popular Discussions View All (2)

Dragon32 May 29 @ 2:35am
@Riplex:
Have you Subscribed to it? Did Steam download it successfully?

Riplex May 28 @ 11:59am
strange, it doesn't even appear in the mod list before i boot the game up

Tim_ May 28 @ 11:57am
I completed yet another playthrough last night, with over 100 mods (including RPG Overhaul), including this one, and it works perfectly.

Turambar May 22 @ 5:44am
I assume it would conflict with Musashis RPG Overhaul?

Z0mb13hunt3r May 19 @ 11:33pm
Can anyone assist me with the console commands, I got the Force Reroll Command figured out [the one where the entire roster rerolls], but I'm trying to figure out how to properly type out the reroll and force gift command for one character. Firstly are the one of these two I'm doing correct? Secondly, what's the [FString] for?

Samael May 19 @ 11:21am
@Dragon32 There is a mod named Chosen Variety Mod which adds an Warlock Psi-Amp which is good i wanted to use it with this mod unfortunately i am unable to do was going as support here.

Samael May 18 @ 4:07pm
@Dragon32 sorry dude i deleted my comment when i found out my mistake it was a reward from chosen variety mod!