Greenlight > Games > Solidust's Workshop
Greenlight is being retired. For more information on how to submit games to steam, refer to this blog post.
This item has been removed from the community because it violates Steam Community & Content Guidelines. It is only visible to you. If you believe your item has been removed by mistake, please contact Steam Support.
This item is incompatible with Greenlight. Please see the instructions page for reasons why this item might not work within Greenlight.
Current visibility: Hidden
This item will only be visible to you, admins, and anyone marked as a creator.
Current visibility: Friends-only
This item will only be visible in searches to you, your friends, and admins.
PIXEL PIRACY
Description Discussions7 Announcements9 Comments462 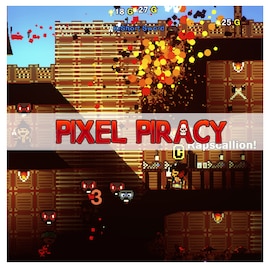 Solidust
Offline
See all 88 collections (some may be hidden)

View PIXEL PIRACY in the store

I am entering Greenlight again with my next game called Ragnorium.

I would love if you guys would head up there and vote for the game as it has multiplayer!

Nothing else to say really. I am at a loss for words. Thank you all! Each and every one of you!

Read More
Description
Lead the life of a famous pirate captain, or die trying in the hilarious world of Pixel Piracy.

Pixel Piracy is an open ended pirate captain simulator / roguelike-like that tasks players with leading a single aspiring captain from the humblest of begging’s to become the most feared pirate on the seven seas!

You will have to hire your crew, build your ship block by block, plot each and every couse, and keep your sailors happy if you plan on making it very far however. This game is not a walk in the park, and you will be put to the test at every turn. Ransack a village, dig up buried treasure, attack foreign schooners, the choice is yours. Loot can only get a prospective captain so far, so you will have to rely on the skills that you earn upon gaining experience, as well as the trust your men have in you!

Will there be an alpha or pre-order?
Unless we get on Early Access NO. We do not want to dilute the title by asking for hand out’s before it’s ready.  There IS an alpha HERE http://www.indiedb.com/games/pixel-piracy/downloads/open-alpha but we want to stress that this is by all standards an OLD version. Our current internal build is MUCH further along.

How long will a standard game last?
The first few games you play will likely last minutes, as you will die horribly for one reason or another. You will learn to survive however, and once you get in the groove of things we believe there should be enough gameplay to last around 50 unique hours IF you don’t die before then. There is no REAL storyline or “end”, but the content packed in should provide more bang for your buck than many titles.

Keep updated on the game progress by following @pixelpiracygame and @alexpoysky on twitter or visiting our website at www.piracysim.com
Popular Discussions View All (7)

"We are not high"
Sahsha

So, just how many of this game's elements will be similar to FTL?
YetiChow
< >
462 Comments

roboticred Feb 16, 2014 @ 12:28pm
Is it possible to controll one of your crew members, not like a turn based kind of thing like using the WASD keys to move and space to attack that sort of thing?

PIXEL PIRACY has been Greenlit and is now listed in the Steam store. For the latest information, purchase options, and discussions for PIXEL PIRACY, please see it on the Steam Store or in the Steam Community.
Visit Store Page
For more details Visit Community Hub
For latest discussions
If you really, really want to, you can continue to the Greenlight page. Information on this page may be out of date, since all the action has moved to the areas noted above.