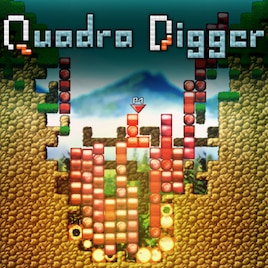 New Video + Updated Images!
January 31, 2017 - Baroque Creations
New Video
Some people seem to think that QuadraDigger is a port of a mobile game, so I busted out my gamepad and whipped up a video this morning to show off some high-level playing :) It's the second video in the media bar, or, if you prefer YouTube:

Thanks, hope that clears some things up :)
-- Simon