Greenlight > Games > Kritz's Workshop > Citizen Burger Disorder
Greenlight is being retired. For more information on how to submit games to steam, refer to this blog post.
This item has been removed from the community because it violates Steam Community & Content Guidelines. It is only visible to you. If you believe your item has been removed by mistake, please contact Steam Support.
This item is incompatible with Greenlight. Please see the instructions page for reasons why this item might not work within Greenlight.
Current visibility: Hidden
This item will only be visible to you, admins, and anyone marked as a creator.
Current visibility: Friends-only
This item will only be visible in searches to you, your friends, and admins.
Citizen Burger Disorder
Description Discussions81 Announcements3 Comments2066 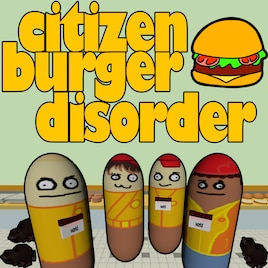 After 20 days and 15,000 votes, Citizen Burger Disorder has been Greenlit on Steam! I want to thank each and every one of you who took the time to vote and post comments, because without help from the community, this could never have happened.

Staying Updated
There's still a long way to go before CBD is ready for Steam, and there's a lot of content I want to add to the game over the coming months. I'm going to be experimenting with different ways of keeping you all updated on development progress, but here's a few starters:

Major news and announcements can be found on my site, http://kritz.net!
Where I can, I'll also cross post announcements here on Steam, if that's something that y'all would be interested in. If I get a few comments on this announcement, that's a good way to let me know that they're being read! :D

Finally, I'm also experimenting with the idea of live streaming game development. I've been streaming once or twice a week at http://www.hitbox.tv/Kritz7, and while I'm doing this pretty infrequently at the moment, I hope to make it a bit more regular. Because I'm an Australian dev, the times that I go live are probably pretty crazy for some people. If you'd like to be updated when streams go live, hit the 'Follow' button on that page and Hitbox will notify you when I put streams up!
This is a great way for me to talk with people while I'm making the game, and gives you a good look into what the process is like for making a game!

And as always there's the discussions page on this greenlight (which I read, but probably won't comment on), and my forum at http://kritz.net/forum where you can post microsoft paint doodles for some reason.

Anyway, I won't make this post any longer! Thanks for voting, and thanks even more to those of you who left comments! Enjoy your holidays! :D
See all 85 comments

https://www.youtube.com/watch?v=Hbm9C5buZ3w
by I AM WILDCAT

And even more if you search for Citizen Burger Disorder on youtube. The videos have all been outstanding!

PewDiePie made this sweet video of Citizen Burger Disorder! Go give it a watch!