Greenlight > Games > cmune's Workshop > UberStrike > Announcements
Greenlight is being retired. For more information on how to submit games to steam, refer to this blog post.
This item has been removed from the community because it violates Steam Community & Content Guidelines. It is only visible to you. If you believe your item has been removed by mistake, please contact Steam Support.
This item is incompatible with Greenlight. Please see the instructions page for reasons why this item might not work within Greenlight.
Current visibility: Hidden
This item will only be visible to you, admins, and anyone marked as a creator.
Current visibility: Friends-only
This item will only be visible in searches to you, your friends, and admins.
UberStrike
Description Discussions37 Announcements5 Comments1286 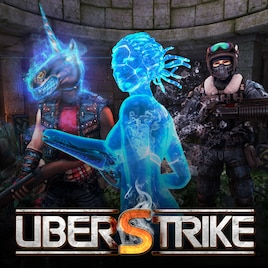 Introduction:
The Warehouse, is a short range map, consisting of boxes in a rectangular map. The main armor source are the big armors on corners. A uber armor can be found in the center of the ventilation system, which can be accessed through either walking in, spring grenading in, or rocket jumping in. Health is scattered across the map in the form of mini, medium, and a uber health. 26 mini healths can be located scattered in the 'no man's land' in the center of the map. Then on each side, there are 5 medium healths, totaling to 10 across the map. One uber health is found dead in the center of the map on the central yellow box. Every type of ammo can be found on the map.

Strafe Routes:
1. The basic route, it is most likely the most used route. It is highly effective, starting at one big armor, and simply crossing the map and grabbing the uber health as well as the second big armor. 2. This route, enables you to grab the uber health from the back, and then rushing forward in order to pressure the enemy. This is especially useful when you are far from the uber health, but are in a good position to launch an offensive attack against the opponent. 3. This is a much more complex strafe route. It takes a lot of practice and is very hard to master. It allows you to grab the opponent's armor in four jumps from the opposing corner. From your side box, you directly jump onto their armor box. Speed must be built in order to make it all the way across, however, it can be greatly useful in order to escape, or in order to rush. It is very hard for the opponent to track, therefore making a very good escape tactic. 4. This route, is a slower, however easier to complete version of route 3. This route is quite simple and straightforward, and is very useful when you want to grab an enemy armor while they are dead. Medium Health Routes
Since we just discussed basic cross map strafe routes, we should discuss easy routes in order to pick up your main source of health replenishment, medium healths. Each base contains five medium healths scattered throughout, and the most effective tactic is to pick them up in groups of two, which gives you 50 hp. The reason for this is, 50 hp is enough to keep you going in the battlefield, however does not take to much time away from you. These small groups of 2 mediums healths give you the ability to replenish 50 health while an opponent's dead, but it is fast enough for you to get back into battle without losing the big armors or the uber health. Entrances to the Vents:
1. Walking In:
There is only one way to walk in. Personally, I would not advise it due to the risk of being trapped or being bombarded with attacks on the ramps while going in. Also, the time it takes to crouch and walk in I find to be dangerous as well as risky. 2. Spring Grenading:
In OP wars, or just in public matches, using spring grenades is a fairly good method of escaping, accessing the uber armor at a moment's notice, or attacking enemies from entries they didn't think you could get in from. 3. Rocket Jumping:
My personal favorite tactic of getting into the vents. While it takes the most skill, and is the most difficult to master, a well placed rocket jump into The Warehouse ventilation system will confuse, distract, or even let you escape from your enemies coming at you. Almost all cannons are able to complete the jump, but I advise a cannon with at least a 50 m/s velocity, due to ease of usage. Defense Positions:
One of the best tactics in the warehouse is to stay on defense, remaining in your base, and firing rockets, shells, and bullets flying across the map, holding your position and making sure the opponent is unable to intrude your base. When defending, make sure you have at least one box, and at least one medium health near you, and move around the box firing, using the box as a shield, and picking up the medium health when you need to. Cover yourself with the box and move around it, making it harder to hit you. The following are my advised positions: Spawn Points:
Spawn points are vitally important to know. They will give you a sense of the positions an opponent may come from, as well as allowing you to judge how to spawn trap or defend. It can make the difference between being good and great, and can make your rushing and battling more effective. In total, there are seven spawn points, they are worth familiarizing with. Advice:
- Remain on boxes, and stay on the ground as little as possible, only going down to grab a medium health every once in a while. Practice strafing in order to stay off the ground. Having higher ground will give you a big advantage in battle, as well as map movement.
- Learn to move backwards. Hardly anybody takes this into account, but moving backwards in the warehouse means grabbing armor behind you, while still defending and attacking the same. A difficult skill to master, deadly useful. I cannot express how many times i've been able to grab uber by moving backwards, without turning my back on the opponent.
- Get cover. Having cover in the warehouse can be the difference between life and death in the warehouse, as they can easily turn direct hit cannons to splash damage, shotgun blasts to mere 10 damage shots, and can block sniper shots.
- Defense and rushing. In the warehouse, in my opinion at least, defense and holding your position is equally if not more important then rushing the opponent's base. However, when there are openings, don't hesitate to rush and intrude their base, but if you lose your base to the opponent, you will be much more likely to lose.
- Carve at an opponent's health. Don't expect to constantly get direct hits, but with the availability of ammunition, don't hesitate to continue popping shots at your opponent, regardless if you will kill them.
- Uber Health over Big Armors. I see people all the time who go to their armor before Uber. The Uber Health will allow you to live longer, and will also still give you time to get your big armor, giving you a huge advantage in the field.
- Don't camp at the Uber Health. While it is a good habit to have the Uber Health at all times, camping on that box will get you killed. It's wide open, with little to no cover whatsoever, making you as good as dead meat. On top of that the box is bright yellow, so you will stand out like a neon sign in a dark room.

Now Uberstrike should fix the authentication problem that doesn't anyone to play the game at all!

Now all I need to do is wait for cmune to get it's shit together and fix the game so I can actually try these tips!.
< >