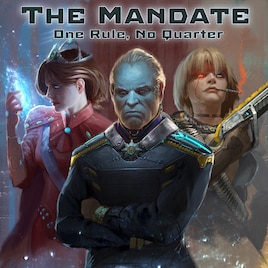 Devamını Oku
Açıklama
Yayınlanma tarihi: First quarter 2015
IMPORTANT: We have now been Greenlit by the community. Thank you to all who took time to review and vote on our project. While we have not set final sales prices for The Mandate, Kickstarter backers will receive the lowest price / most bang for the buck. Anybody who backs us on Kicksarter will get a choice of a Steam key or other DRM-free alternative. Check latest announcement for more details.

UPDATE: Play Scourge of The Mandate and try your hand at piracy with our text adventure {BAĞLANTI SİLİNDİ} here

Q: The premise and backstory are unclear!
A: Read more about the backstory here: {BAĞLANTI SİLİNDİ}http://forum.mandategame.com/viewtopic.php?f=32&t=25

Check out our interactive prologue, design your captain and chronicle his adventures and finally attend your own court martial!
{BAĞLANTI SİLİNDİ}http://www.mandategame.com/charactercreator/

Check out our interactive ship designer and skin, equip and blow up your own ship: {BAĞLANTI SİLİNDİ}http://www.mandategame.com/mandateshipbuilder/shipbuilder.html

Some of the titles we have worked on and shipped include: Assassin's Creed 1&2, Mafia 2, Alan Wake, FarCry 2&3, Age of Conan: Hyborian Adventures,Call of Duty 3, Splinter Cell, Planet of the Apes, Saga of Ryzom, FIFA ONLINE, FarCry Evolution, Rainbow 6 Vegas, The Secret World and more.
< >
750 Yorum

Molested Bunny 24 Eyl 2019 @ 3:40
mandategame.com - This domain has expired. If you owned this domain, contact your domain registration service provider for further assistance. If you need help identifying your provider, visit https://www.tucowsdomains.com/

St.Akardi 31 Mar 2017 @ 19:43
An Update for the Trademark;PETITION STATEMENT Applicant has firsthand knowledge that the failure to respond to the Office Action by the specified deadline was unintentional, and requests the USPTO to revive the abandoned application.

St.Akardi 17 Mar 2017 @ 8:50
@Drakken,
Can you put up your source please?
I find such a notice on trademarkia. Tried the US Patent and Trademark office. It says it can't handle my process.

Drakken 17 Mar 2017 @ 2:57
Abandonment Notice! On Thursday, March 2, 2017, a U.S. federal trademark for Perihelion Interactive, S.a.r.l. registration number 86561595 was abandoned having the name THE MANDATE. The Reason provided as ABANDONED - FAILURE TO RESPOND OR LATE RESPONSE. Apply Now for this name, Starts at $199!

St.Akardi 28 Oca 2017 @ 7:58
So people are wondering if the Mandate has for an update if there's any. There's nothing worthy to post on Steam Greenlight on that front.