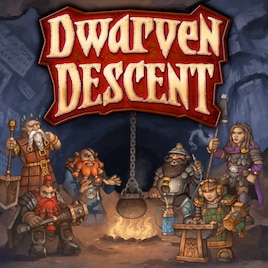 Devamını Oku
Açıklama
Yayınlanma tarihi: Late 2015
Dwarven Descent is a game where killing the monsters with the dungeon is as much fun as pummeling them with the heroes.

Dwarfurious 2 Eyl 2015 @ 13:36
Oh yeah im aware :D all things dwarven! i just hope i can grab the books before the game is done. Were they at PAX? You should also check out We Are The Dwarves! plus there's about 5 other Dwarven themed games going through greenlight right now

TinkerHouse Games  [yaratıcı] 2 Eyl 2015 @ 12:36
THOUGH... we will say this. We're trying to help our friends over at KING Art Games get their dwarves off the ground too. Take a look at what they're cooking:
https://www.kickstarter.com/projects/kingartgames/the-dwarves-a-new-storydriven-fantasy-rpg

Dwarfurious 1 Eyl 2015 @ 19:38
Hhmmm maybe not, i guess all the ones i know are in Germany =/ unless Divinity original sin 2 was there? They let you be a Dwarf this time around! All things Dwarven, i follow!

TinkerHouse Games  [yaratıcı] 1 Eyl 2015 @ 19:34
Sadly no. One of the downsides of being a small studio at PAX is everybodies on deck for the booth at all times. We got to see the games around us in the PAX Rising section and those were pretty cool. Were there any we should have seen?

TinkerHouse Games  [yaratıcı] 1 Eyl 2015 @ 12:33
Thanks to everyone that visited us at PAX Prime 2015! We'll be posting a ton more content and updates soon as we get closer to Early Access release. The convention gave us a ton of great insight into what we're doing right and what we need to revise. We're going to bunker down for a few weeks and work on the revision part.

TinkerHouse Games  [yaratıcı] 12 Ara 2014 @ 10:58
Hey all. We're planning on getting an update out this weekend. The holidays have hit the schedule as they always do so we're a bit slow on this update. Talk to you all soon!

TinkerHouse Games  [yaratıcı] 29 Eki 2014 @ 17:15
@Citizen Keen - We'll be giving everyone a chance to participate in the alpha, either via early release purchase OR if you were a backer at the right level we'll be sending out Steam keys. As we get nearer to that we'll be giving out more specifics on timing.

Citizen Keen 29 Eki 2014 @ 16:46
I'm a kickstarter backer; would love to participate in the alpha (especially based on emails with Mark). Please keep me posted.