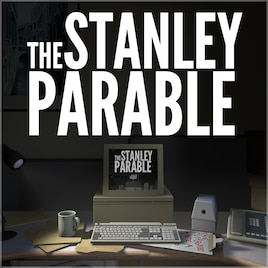 The Stanley Parable is available for purchase RIGHT FREAKING NOW!! Through launch week the game will be 20% off!

4 years in the works, and we're finally here. Thank you everyone for all your love and support, it means more than I could ever say.
<8

The demo is a completely spoiler-free experience meant simply to help you understand the style and tone of the full game without giving away any of its secrets. It will tell you everything about The Stanley Parable, and it will tell you nothing.

It's the beginning of the end. In one week, this crazy adventure comes to a close. For now let's enjoy a nice, simple demo and reflect on what, if anything, it all means. THANKS EVERYONE FOR ALL OF YOUR LOVE AND SUPPORT YOU ARE THE BEST!!!
Leer más
Descripción
Fecha de lanzamiento: October 2013
Follow the game on Twitter {ENLACE ELIMINADO}twitter.com/HelloCakebread

What is The Stanley Parable: HD Remix?
It is the remake/sequel/expansion to The Stanley Parable, a Source mod released in 2011. The game is an experiment in video game storytelling, or the point of it might be that there’s actually no story at all, or maybe the point is that there’s no game. It’s about choice and freedom, possibly, but actually it might be about something else. You will make a decision that means nothing, you will walk a path that goes nowhere, and if you REEEEEEEEALLY look hard enough, none of it will make sense.

Thanks, you’ve said absolutely nothing about the game.
That’s not a question.

So how is the HD Remix different than the original?
The core structure is the same, so those who played the original already know the basic premise. That said, The Stanley Parable: HD Remix is a game of surprise. If you’ve played the original game you may be delighted/infuriated to find you actually only know half the story.

Again, this is not helpful and generally a bit irritating. Specifically, what has changed? Are there new endings? Did you keep the original endings? Do you still play as Stanley? Is it the same Narrator?
Why this insistence? Why do you NEED to know what’s in the game? If the best way to play The Stanley Parable was to know all of this information ahead of time I would have given it to you. Seriously, I’m on your side, I’m not trying to trick you here. There’s a reason I’m holding back these details.

Woah, hold on, where is this coming from? I thought I was asking the questions.
Are you? Why was that? Because your text is boldface? Because you spoke first? Who exactly are you? Do you know? Can you tell me, right now, who you are?

I think…I’m pretty sure I can…I had to just a few minutes ago before they’d let me in here…
See? You’re just making things up again. You were not anywhere before you were here because there is no here. In the course of this very conversation you’ve made up this whole identity for yourself and for me, about how you’re interviewing me because you think I know something about the game. It’s childish, it isn’t helping anyone. I’ve been trying for ages to get you to stop doing this and you won’t, you can’t let up for just two seconds to examine yourself and it’s driving me crazy.

Woah, hold on there, why do you think we know each other? Are you sure I’m who you think I am? If you’re not supposed to be telling me something about the game then what exactly is the point of this whole exchange? Why is it here on the game’s Greenlight page? Is this somehow supposed to be representative of the experience of playing the game?
If you need me to answer that then you have much work to do. I think this conversation has outlived its ability to convey anything to the reader. When you want to speak with me again you know where to find me.

What are you talking about?? You’re just going to leave? Is this somehow your point, to make me feel alone? To just let me sit here in the confusion? Why?? I don’t get it, I don’t get what this game is supposed to be......I’m alone again, aren’t I. There’s no one here. I don’t understand. I don’t understand. Please someone help me, someone help explain this to me, I’m just trying to understand! I just want to know what’s going on! I just want to understand.
< >
2,180 comentarios

wildgoosespeeder 7 DIC 2015 a las 20:38
I usually don't do walking simulators but this game was an unexpected surprise being so funny so I'll make an exception. The narrator is what keeps an otherwise boring concept interesting. STANLEY!!!!!!!

BrawlMelee 14 JUL 2014 a las 17:11
i frogot to tell u guys that i wached the BreakTheGame ending on youtube 2 see if i mist anything and i wanted to try it 4 my self but it did not work. after when the guy said "my goodnees is 4thirty am supposet be having a back sack and crack" and thenthe video is gone that the narrator showed me and then stanley cant move but his head so plz fix it!!!! SPORELLR SO DONT READ onley clatic cafe BTW i cant spell