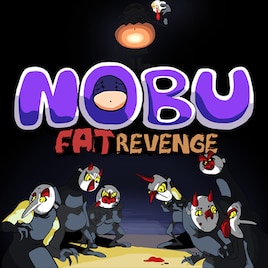 Soooo....Thanks to every single one of you, the game just got GreenLit!

This is an amazing moment and i can't thank you enough for your support and votes!!

If you're in doubt about giving a thumbs up or want to cover the game, just send me an email at contact@binarypigstudio.com and i'll be glad to give you a copy!

Ler mais
Descrição
"Nobu: Fat Revenge" is a side-scroller, action/platformer game that challanges both your skill and patience like the old NES games.

Tackling the game alone or with a friend in Coop-Mode, this game features fully hand-draw hd cartoon/anime art, a fantastic sound track, mixing japanese instruments with rock guitar, resulting in an odd but great to hear music. It also features tons of different types of enemies, smart and dumb, fun habilities and weapons to try out and a back story using comic pages to keep the interest up.

Mission
Seeking for revenge, Nobu has to face danger throughout 5 stages filled with enemies, traps and bosses till he reaches his goal.

sorry for the gif compression and darkness, this does not represent the in-game quality

More about the studio
"Nobu: Fat Revenge!" is being created by a single developer named Tiago Vilaça, better known as Binary Pig Studio.
Me handling all the code, art, animations and now sfx, but with the help of some freelancers to compose the music and do the sound effects, i was able to get this far but with your support more can be achieved by this little swine.


Thank you for your support!
< >
51 comentários