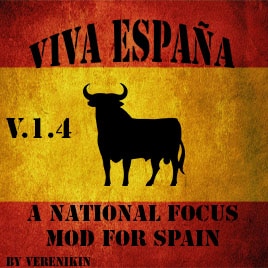 - 72 New National Focuses, all made for Spain with custom rewards and text.
- GFX pictures for ships courtesy of Cpack
- A new design company which interacts with a focus.
- Lots of flavor in the focuses.

What can you do?

Take back your former colonies! Take back Gibraltar! Spread your ideology (either by force or by peaceful means) to Portugal, seek help from your allies in designing better tanks, and lots of other things!

The first full National Focus mod for Spain. Spain is a nation with lots of options, but no NF tree. I've decided to change that. This tree adds flavor as well as new options for anyone playing Spain.

If you wish to translate the mod into your own language, feel free to do so. You can send me the localization and I can add it to the mod, with credits to you of course!

I've made sure to adapt the mod to Spain, making sure that it is neither too OP nor does it nerf Spain.

Multiplayer compatible if all players have the mod.

COMPATIBILITY:
This mod should work with any mod that doesn't change the ideas and national focuses for Spain. This mod does NOT change the events or the technologies for Spain, and as such should work with any mod that does so. If you get compatibility issues let me know and I will do what I can. I will do my very best to make sure this mod can be used with as many other mods as possible.


DON'T FORGET TO RATE IT IF YOU LIKE IT!

Verenikin  [작성자] 2019년 11월 22일 오전 2시 08분
Because I'm extremely lazy. And apparently you need to create some new document or some shit. Its probably really easy but I can't be arsed. The mod works fine so people should just use it if they want to.

Red 2019년 11월 21일 오후 10시 43분
Even if it works just fine why not change the checksum so it shows as up to date? It'd take 20 seconds to do and would help people when they're looking for mods to subscribe to