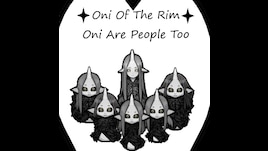 サブスクライブしてダウンロード
Oni of the Rim

このアイテムがあなたの サブスクリプション に追加されました。いくつかのゲームでは本アイテムをダウンロードする為にゲームを再起動する必要があります。
解説
The mysterious horned and feathered humanoid found on some rim worlds, Oni are often sought out by Glitterworlds for their beauty as a sort of exotic pet. Worse still some are kept as livestock for their feathers, pelts and horns, all having practical and decorative uses. Oni live in temperate areas and rarely employ clothing due to the uncomfortable sensation on their feathered bodies. Due to this, they are highly vulnerable to being set on fire.

(Oni of the Rim: Lite AKA Race/Faction only) https://steamcommunity.com/sharedfiles/filedetails/?id=1807327083

Combat Extended compatibility included, but without Oni themed weapons. To re-enable them, requires the "Oni of the Rim: Combat Extended" patch mod.
https://steamcommunity.com/sharedfiles/filedetails/?id=1825546241

In comparison of base human stats, Oni are more attuned with nature and are more physically suited to a wider set of environments, and do not care about being nude or sleeping on the floor. They are more adaptable in unarmed combat, using their razor sharp nails to claw away at their target, and able to use their horn for impaling. All natural attacks can cause bleeding. In social fights, their damage is restrained so they don't cut off a limb or cause excessive hemorrhaging.
With them being more focused on the physical and nature side, they have little trouble with grasping the scientific concepts and and precisions of construction and crafting. When building or fixing machinery, they can seemingly be a little bit clumsy, more likely to make small critical mistakes leading to failure.
At least with crafting, they simply take little bit longer to not make such mistakes, although they have completely no issues with tailoring or artistic work.

They got a tiny bit more difficulties in making safe meals, due to them perceiving food and ingredients a little different to us humans. They are more than happy casually eat things raw, including insect meat.

To acquire Oni Feathers, an Oni may preen themselvs at a crafting spot, using Demon Breath Ointment (Basically a crafting bill carried out by a Oni). Another option, much to the dislike of the Oni, is to force shear feathers off them as a operation bill. Be warned, they will be VERY unhappy, and it has a cool down.
Oni also randomly gain a hediff shown in the health tab, to shed feathers and horn fragments. When it is active, it'll periodically drop Oni Feathers and Oni Horn Fragments respectively. Only player and prisoner Oni's will spawn the items, and only if they're not downed. Feathers won't spawn when they have cool down of being force sheared.

Three new plants, each involved with the Oni tribal culture. They are locked behind a fairly quick research that an Oni needs to perform to teach your colonists. Already known in Oni starts.
-Featherleaf - A cousin variant of the smokeleaf. Oni's smoking the joint will periodically shed a few extra feathers whilst high on it.
-Demon Breath - A plant with healing properties and also a spice of sorts only appealing to the Oni. Other races will not enjoy the Oni-styled recipes that uses this.
-Yokai Pepper - Functions as a raw vegetable, but also used in a few drug recipes and in their delicacy meal.
A drug line based off Oniamine, a precursor chemical that can be extracted from Oni feathers, horn fragments, pelts and... Their meat. The drugs currently are mainly short term combat boosts, that will make the user a bit more easily tired and hungry once the effects wear off. There is a narcotic poison, that can be used to make a new blowpipe dart weapon.

New weapons
Fukiya - A simple weapon consisting of a narrow, long tube for firing light projectiles or darts. While the dart itself is not so lethal, it has narcotic poison on the tip.
Low base damage
Each hit causes 0.06 poison
As severity increases the target will suffer reduced consciousness manipulation and moving speed at severity 3 the target is at risk of death or brain damage
Range- 18
Base Damage - 3

New Animal
The scientific name of this great owl is Ornimegalonyx. It is a flightless owl with immensely powerful legs and talons. Standing over a meeter tall and having solid bones, they are terrifying hunters. Living in groups,
it is very uncommon to encounter a singular individual. Males are easy to identify by large head plumage. Very intelligent and can be trained, however they can be as vicious as a Warg when angry.
-High attack speed
-High movement speed
-Advanced training
-Unique "Wise mega owl" health status, chances to gain it increases as it gets older. Buff gets stronger over time.
-An Oni can force give "Wise mega owl" buff with a medical bill.
Predatory - Can and will eat you, good news is they are fairly easy to take down from range

Has some interaction with Kolra's Oni race mod, not being xenophobic with each other, and his Oni can use some of our stuff.

Tarojun  [作成者] 1月13日 6時18分
Yes, can expect the "large body Oni" used by the Ancestral Oni, which the game will class as a separate race. Currently configuring some other balance changes around the mod at the same time, and I was tied up with the EPOE-Forked project recently.

Nobudi 1月13日 0時26分
Hello, just dropping by to let you know how much I'm enjoying this mod, and just wanted to ask if we're to expect the large body oni in a future update or not. Happy new year to you all

DestyNova 2019年12月18日 13時30分
Many thanks! I'll be looking forward to future content from you guys.

Tarojun  [作成者] 2019年12月16日 19時26分
CE patch updated for stuff affected in here, now waiting for Mori to upload the one for main mod. The Lite and dedicated CE patch for weapons has already been updated.

Tarojun  [作成者] 2019年12月15日 19時25分
And Mori Shep is very busy as of late, so even a small update that I wanted to patch through, will take a long time. Which I may add it together with the larger fixes that I'm working on.

Tarojun  [作成者] 2019年12月15日 19時22分
Mostly waiting on the artwork for essentially a ground oven, a "fireless" version of a campfire. No more being visually unease of a Oni walking past a open fire that is the campfire place.
Also, will be compiling a fix for CE, on the Oni themselves.

The furniture will only be a few items, and I need to copy paste a few bit of C# stuff which I'm constantly being reluctant to touch.

And seems from popular demand, I have been thinking on creating the Ancestral Oni branch race whose appearance shall be closer to the larger fully grown Oni from the animal mod. The main hurdle going to face is draw sizes and body being generally different than others, will be seeing how to reduce as much art render clashes as possible, both visually and code-wise... Show hairs with hats mod is prime conflict with draw sizes of larger pawns...

DestyNova 2019年12月15日 12時41分
I love this mod. Are you planning on expanding it further? In the reseach tree there is Oni furniture but it says it is placeholder.

Wendigo 2019年11月21日 0時21分
I very much would like to know if you intend to make it so they get big, like the dignified photo I see of a full grown oni.

Tarojun  [作成者] 2019年11月15日 16時41分
Small update.
- Fix to resource readout, not more pink squares as category icons for Oni meals and drugs.
- An oversight on the melee dps of the fukiya is also fixed.
- The combat drugs research reduced from Industrial to Medieval tech.