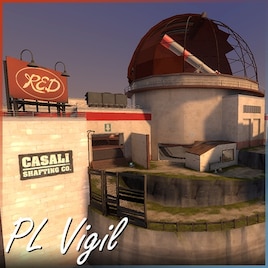 Αυτό το αντικείμενο προστέθηκε στις συνδρομές. Μερικά παιχνίδια απαιτούν επανεκκίνηση για να ληφθεί το αντικείμενο.
ΠΕΡΙΓΡΑΦΗ
RED have an observatory in the mountains, which is something that BLU doesn't like. So BLU want to blow it up...

PL Vigil is a single-stage, 4-point payload which was designed for both casual pub and competitive play.

This map has been played in RGL, ETF2L and UGC.

Thanks to everyone who played the map, and who provided feedback over its development, with special thanks to:
- TF2Maps play testers
- Smurfy Servers, for playing the map and providing feedback
- That's So Steve!, Karl, Brick, Bowl and Exa for all of their feedback
- ETF2L for testing the map in the HL Season 12 Preseason Cup
- UGC for the support throughout Season 22 of Highlander
- HLPugs.tf for running the map, providing a bit more feedback

Also thankyou for looking at this page!

theatreTECHIE  [Δημιουργός] 9 Μαρ στις 3:17
If anyone wants to play on the map, it is currently in rotation on the Creators.TF servers.

Damocles 8 Μαρ στις 11:10
I remember this map. Any servers still playing it. I had a hell of a time!

rosy 8 Μαρ στις 11:03
get rid of the chokepoint at the beginning of the map rbuh

R3DFOX01 31 Ιουλ 2018 στις 15:14
I was working on improving the generated nav_mesh for this map, and I found some hidden ducks. lol nice job

tbenajj 20 Ιαν 2018 στις 10:37
Anyone thinking that this'll make it to the Heavy Update? Or any other update? I sure have hopes for it