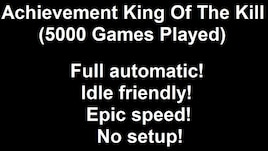 Description:
Get your King Of The Kill and Cold Pizza Eater achievements with this ultra-fast, no-setup map!
I recommend the use of Version C if this map does not work.
Please read the Troubleshoot section before asking in comments the solution of a problem.

How to proceed:
- Subscribe to download the map;
- Boot the map:
»»»»» OPTION 1 (Recommended): Open console, type this: game_mode 1;game_type 1;map workshop\320651298\achieve_kingofthekill
»»»»» OPTION 2: Go to "Play a game offline with bots", select "Workshop", select this map and start it as Demolition game, add bots on normal/hard difficulty.
- Do NOT SELECT ANY TEAM, the game will do it for you.
- PROCEED WITH CAUTION, these extra commands may speed up the achievement BUT it may cause the game freeze bug to occur. Use them if you can be bothered to reboot the server/CSGO: mp_round_restart_delay 0.1;mp_freezetime 0;bot_quota 2;mp_halftime 0
- Due to panorama release, auto CT Selection got broken engine-side. Use a heavy object on top of your spacebar or a keyboard macro to always be pressing space so it auto-selects CT side for you.

Questions & Answers:
Q: Is this map truly full automatic?
A: Yes, it will work perfectly without any further user input after map boot and first team selection.

Q: LOL if the map is faster with "mp_round_restart_delay 0.1", why isn't it on the map???
A: Tried to add it to the map, but it never worked when set by the map itself.

Q: The first round shows a huge half-time duration, why? And will this be there all rounds?
A: IDK why it happens but it only happens on the first round, leave it. No worries.

Q: Why so much lag on the videos? Does such small map lags that much?
A: Lag is video-capture program based, the game runs perfectly, you only might have some lag while accessing the menu cause of too many information being processed by the game.

Troubleshooting:
Problem 1: Game is stuck on the first round, showing "Counter-Terrorist win" and doesn't move!
Fix: FIRST, TRY OUT ONE OF THE NEW VERSIONS! CHECK THE TOP OF THE PAGE!
Reboot CSGO and don't launch any online, offline or LAN game. Then try all options until it works:
A) Use the other boot option avaiable (See "How to proceed" section);
B) Use OPTION 2, but instead of booting this map, boot another random map, then use "changelevel" command to change to this map;
C) Exit the game, go to directory "...\Steam\SteamApps\common\Counter-Strike Global Offensive\csgo\maps\workshop\320651298" and move the ".bsp" file to the map's directory (Go back two folders). Boot CSGO and use OPTION 2, but now type "map achieve_kingofthekill";
D) Combine option B with option C;
E) Verify the integrity of the game's cache (Steam » Library » Right-click on CSGO on the game's list » Properties » Local files » *Last option*);
D) Reboot your system and re-do all this [Yeah right...];
E) Re-download the map or change to another computer. If new computer doesn't fix it, try some of these options;
F) It's the "F" option... Everybody understands the "F" word. So... Give up. Some people never get this map to work because of the damn intermission. I'm sorry to let you down.
Reason: It's a random problem that is CSGO related. In the map's configuration, I did all possible for it to work, but it still bugs sometimes. It's related to the game's intermission. (If someone has a permanent fix, I'de love to hear it!)

Problem 2: The game was running fine, but I minimized the game with Alt+Tab or *Windows key* or Ctrl+Alt+Del » Task Manager and, when I returned to the game, it was frozen on a round. How to leave the game running and still use my computer?
Fix: Go to Video settings and run the game on a window. The game may still cast audio like this.
Reason: I assume it's because you're playing offline and CSGO knows that, so it doesn't process the game as the player isn't playing because CSGO is minimized.

Problem 3: The game isn't counting towards the achievement. What to do?
Confirmation: Boot another gungame map, play two full rounds » Check if progress is there. If not = Random CSGO bug. If you see progress on normal gungame map on both rounds, try going to my map with "changelevel" command. If it does not work in my map, check below.
Fix: Reboot CSGO and before launching the map, check the command "sv_cheats". It must be set to zero. If even after this verification it does not count towards the achievement, try:
A) Playing it in another day/hour;
B) Re-downloading the map;
C) Use option "C" of Problem 1;
D) Use option "E" of Problem 1 (Unlikely to be related but...).
Reason: May be random problem of CSGO's/achievement registration. It also may be due to problems on steam cloud (That's why Option A is there). It should be fixed with time itself. If it does not... I'm 100% impressed! At least on this specific achievement.

Problem 4: I'm trying to boot other maps but now there are some commands from this map that got sticky. Fix?
Fix: While it's not of this map's responsibility, I can address this problem. There is a list of all commands used on my map on the discussions about this map, thread named "Auto-commands list" (Scroll upwards, right below the title click on "Discussions"). There you can find and fix to the regular value any command that may be interfering with whatever you want to do.
Reason: Console commands are permanent in one single session and sometimes even across sessions. Therefore, when a map changes, or a new offline game is booted, the previous set-by-map commands will apply if not changed manually or by game auto-settings.

Liked my map and want to donate me?
Here's my trade link: Click me!
Beliebte Diskussionen Alle anzeigen (2)

Hassle 10. Mai 2019 um 9:25 Uhr
Works with all the commands just need something to block the spacebar with or use macro.

KFlick 24. Jan. 2018 um 1:19 Uhr
Scarce’s Overdose you the mvp man. just paly with friend and select this map on workshop. then pick ct and type this command "mp_round_restart_delay 0.1"