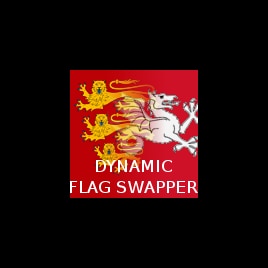 Cet objet a été ajouté à vos Abonnements. Certains jeux devront être relancés pour que l'objet soit téléchargé.
Description
Are you tired of seeing the flag de Normandie fly over a fresh-unified England that's never heard of a Norman? Annoyed that the kingdom of Wessex avoids its historic golden wyvern, but unwilling to let that same flag rule the duchy of Hampshire? Do you miss the old flags of Gloucester and Warwick, before Paradox stuck them with Hwicce and Mercia's flags, even in the 14th century? Also want Dyfed to use Pembroke's flag sometimes despite it not fitting the mod's title? Probably not, but I did, so I made this mod and might as well release it!

This mod uses 2.2's flag-swapping feature to allow a few titles in England to switch between Saxon and Norman/English flags, depending on who rules them. Anglo-Saxon flags dominate the isles until the Norman invasion; start after the invasion? English flags instead! Start at Stamford bridge? If William wins, all flags under Norman control swap. Manage to reclaim the isles for the Anglo-Saxons after the Norman invasion? The flags switch back!

VityViktor 30 sept. 2019 à 9h01
Nevermind, I found the issue in "d_hereford.txt", "d_norfolk.txt" and "k_england.txt" files. They lack some lines that were added in the Iron Century update. It's an easy fix.

VityViktor 30 sept. 2019 à 8h49
Some duchies in Northern England are independent during "Iron Century" start date. Is this normal?

i use this Mod with Patrum Scuta and before 3.0 + Holy Fury i dont have any Problems. Now i have a black CoA for England (Anglo-Saxon) every Time i reload a Savegame. I fix this temporary with deleting gfx-folder every Time.

Desmond Kilometres 10 déc. 2018 à 0h43
so i played 4 ingame days saved and quit then relaunched and loaded the save. everything was fine. this happened after around a year in game when i had the bug. did you test that far?

Ijtzoi  [créateur] 9 déc. 2018 à 9h25
After some testing, I get that bug only if I activate another mod that adds titles after I save and before I load. I would guess either that you activated a mod or that a mod you're subscribed to downloaded an update. There might not be a way to safeguard against this happening again, but it shouldn't be a constant occurance.
In the meantime, it may be possible to fix affected saves. You might be able to manually force correct flags by triggering the mod's events through the console. To get the English flags, enter "event AngloFlags.0" into the console, then AngloFlags.1, 2, 3 and 15. To get the Saxon flags, launch events AngloFlags.10, 11, 12, 13, and 16.

Desmond Kilometres 9 déc. 2018 à 1h59
hm i also have a save game bug when i load the save all the flags are randomised