Store Page
Source Filmmaker>  Workshop > Johnny's Workshop
This item has been removed from the community because it violates Steam Community & Content Guidelines. It is only visible to you. If you believe your item has been removed by mistake, please contact Steam Support.
This item is incompatible with Source Filmmaker. Please see the instructions page for reasons why this item might not work within Source Filmmaker.
Current visibility: Hidden
This item will only be visible to you, admins, and anyone marked as a creator.
Current visibility: Friends-only
This item will only be visible in searches to you, your friends, and admins. 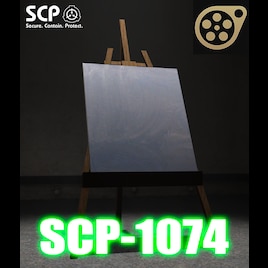 Johnny
Last Online 6 hrs, 6 mins ago
See all 19 collections (some may be hidden)

This item has been added to your Subscriptions. Some games will require you to relaunch them before the item will be downloaded.
Description
a.k.a Stendhal's Nightmare

Originally posted by SCP Foundation:
SCP-1074 is a portrait-sized oil painting on canvas, produced by an unidentified artist. When photographed or videotaped, the entirety of SCP-1074 appears to be painted a uniform shade of gray, with distinctly visible brush strokes. Samples removed from SCP-1074 by a remote-controlled drone have been identified as an oil-based gray paint of the type commonly available in art supply stores in the United States.

When SCP-1074 is viewed by a human being, the observer immediately begins to exhibit physiological symptoms similar to the onset of Stendhal syndrome,1 including increased heart rate, sweating, and vertigo. The individual viewing SCP-1074 will attempt to vividly describe the image they are seeing to anyone present, frequently describing it as the greatest or most moving work of art they have ever seen. Statements from persons so affected describe it not as a blank gray canvas, but as a highly detailed painting of an inconsistent nature. No two individuals exposed to SCP-1074 have described the same painting; recurring themes in subject statements describe imagery suggesting human mortality, individual insignificance, legal or moral judgment, religious eschatology, and [REDACTED].

The model was found in the game's Wiki, which was later implemented. In the version 1.3 it was removed from the game. Now it is back for your SFM needs!

The Nightmare Squid May 4, 2018 @ 5:15pm
What's the program? I could stand to get some of the mesh files including rooms from it. If they can be ported to Blender and then to Source, that's all I need.

The Nightmare Squid May 4, 2018 @ 7:30am
What file types are they? 'cause everything in my copy of CB has .b3d files, and I can't find where to make them...less impossible to port. Or am I just missing something?

Bayside Sep 1, 2017 @ 11:34pm
@Chari You would click show model in element viewer, add override materials, and look for the texture of the canvas and then replace that texture with the desired image in the appropriate format. (.vmt and .vtf formats are most common with textures of this nature.)
< >