Komentáře
Insanity
Did I ever tell you what the definition of insanity is? Insanity is doing the exact… same f***ing thing… over and over again, expecting… s**t to change. Insanity is when you pick up another Jackal Tape expecting of hearing something further than “Stealing Boots”. No, no, no, no, no, please! This time it’s gonna be different record!

Insanity is when a bug is not fixed for 10 years.

Signs and symptoms
With v1.03 update, a bug was introduced that does not allow to listen and does not mark as taken the tapes from the second Southern map (Bowa-Seko) further than #09 “Stealing Boots”. The first picked up tape on this map is written as #09 “Stealing Boots”, and all subsequent tapes on the same map will simply repeat it, forcing to listen again and again as Jackal tells a sad story about a kid stealing boots from a dead soldier.
Causes
During the game, a list of 17 tapes is kept in memory, in which, among other things, the following information is noted: 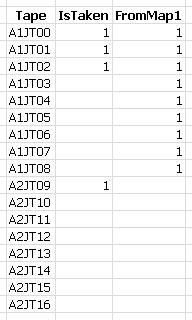 Figure 1. Illustration of a list of tapes in memory. The IsTaken field is filled in for example. The FromMap1 field is always filled like this.

The picture above shows 17 tapes. Number 00 is a tape given by Reuben Oluwagembi at the beginning of the game, the rest are scattered around the world. The field IsTaken will be set with “1”, marking tape as picked up. The field FromMap1 is pre-populated when the game (or save) is loaded, marking with the “1” all tapes from the first north map (Leboa-Sako).

When the next voice recorder is picked up, the NewJackalTapeFound subroutine is triggered in the game engine. Tapes from the list are checked one by one for: whether it is marked as taken, and to which map it belongs. Finally, depending on which map you are standing on now, the decision is made: to play the tape and mark it as picked up or look further down the list.

It's simple. Look at this correctly working scheme from the versions of the game from 1.00 to 1.02:

Figure 2. The correct logic of the NewJackalTapeFound subroutine. Green - YES. Red - NO.

Note that if the “Tape Taken” check shows that this tape is marked in the list as picked up, it immediately goes along the green arrow to the next one in the list (Next). According to this logic, tapes from 00 to 08 will be played (and marked) only if you picked up a voice recorder on the first map, and tapes from 09 to 16 - only if on the second.

After update 1.03, the subroutine logic has changed a bit:

Figure 3. Incorrect logic of the NewJackalTapeFound subroutine after update 1.03

All other changes in the scheme miraculously did not affect the logic. Even if you simply return the green arrow from “Tape Taken” back to “Next”, everything will work as it should.

This error is another confirmation of the statement “If it ain't broken, why fix it”. Perhaps, during some refactoring of the NewJackalTapeFound method, some brackets were put in wrong place of the source code, and the logic changed.

Treatment
To eliminate the error, it is actually enough to change just one byte in the Dunia.DLL file to turn the logic of the subroutine in the right direction.

In order not to change the file physically, I recommend using the utility to start the game with various fixes right in the process memory. Read more:
https://steamcommunity.com/sharedfiles/filedetails/?id=1620638035

Self-medication
If you are confident in what you are doing and are familiar with hex editors, then this is what you need to do.

Visit doctor
Those who do not want to bother with manually editing the file can try an easy-to-use patcher:

Download and run the file FarCry2StealingBootsJackalTapesPatcher.exe. Use the Browse button to select the Dunia.DLL file. Click Patch! 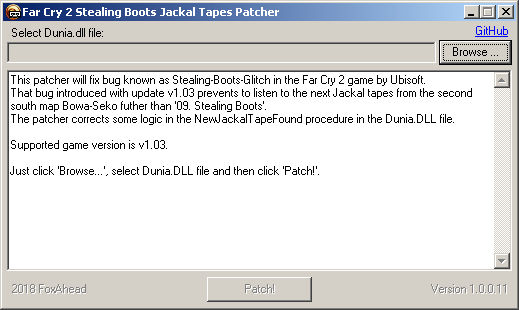 On the start, the program will try to automatically determine the installation path of the game, so the Browse button should immediately take you to the desired folder, and all that remains is to select the Dunia.DLL file. Before applying the patch, the program checks the file, and if everything is OK, then the Patch! button below will be enabled to click. The backup will be created automatically as soon as you confirm patching. If at any of the stages something goes wrong, the program will report that.

The patcher searches for a suitable pattern of bytes using mask, so theoretically it is able to correct the subroutine even in some exotic Dunia.DLL file (other size, other addresses), provided that there really is an erroneous subroutine.

Prognosis
The final recovery can be considered only if, before applying the patch, you picked up no more than one tape on the second map. Otherwise, all subsequent picked up tapes simply disappeared irretrievably, without appearing in the list. In this case, look for an earlier save. Or ... why not replay the game? 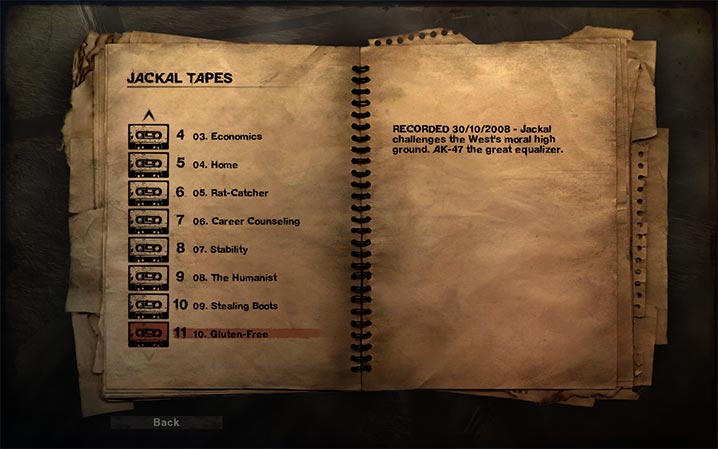 P.S.
Did I ever tell you
what the definition
of insanity is?

vlastovka 27. led. v 13.52
Nice. I used to hack OS/2 more than 20 years ago when I was young and still rather capable. Its API was way cleaner and better documented than Win32. It is such a shame IBM ditched the OS.

I have one more question :) Was the free IDA enough for your needs or have you bought the full version?

vlastovka 26. led. v 4.56
And thanks again for detailed description of the problem and tip how to perform the fix with a binary editor.
I wonder how did you find the place in the code? Has dunia.dll debug symbols attached so you searched functions until you found its name and location in the code? What tool did you use? :)

FoxAhead  [autor] 24. led. v 1.19
Have you picked up NO MORE THAN ONE voice recorder on the south map? If YES then you are OK to continue your current game.
In each map there are 8 voice recorders hidden (one per outer square). Each one of them triggers tape playing. Without patch every south voice recorder triggers "Stealing Boots" tape without progression to the next tape. The patch only restores progression but not missed tapes. All picked voice recorders ar gone forever.

Oddabit 25. čvc. 2019 v 15.08
Just confirmed this. Been waiting for a fix for this forever, used the stand-alone Jackal Tapes patcher. Got to Bowa-Seko, one tape Stealing boots. Okay, normal. Immediately drove over to another tape, ITS DIFFERENT!! Finally! Thanks so much for the fix.