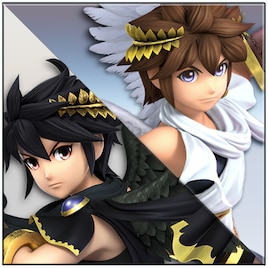 Този артикул беше добавен към абонаментите Ви. Някои игри ще изискват повторно пускане, преди артикулът да бъде свален.
Описание
Enhanced models of Pit and Dark Pit from Super Smash Bros. This is neither the Wii U model nor the Ultimate model, but a combination of the two, with custom details and enhancements mixed in. It retains the texture style from Smash 4, but with much improved and cleaner details overall.

The control groups file in the above download will tag and organize all relevant bones and groups for this model in the animation set editor.

All of my models now use the same control groups file, just use the one from whatever my latest release is.

In addition to the overall model improvements, this port contains all of Pit's equipment, skins (Wii U color schemes), all major animations with corrected foot placement and helpers, a complete set of face flexes that can form any expression, and materials replicated as accurately as possible and in some cases using the same exact material parameters from the game. All details from Dark Pit's model have been converted to work on the same mesh platform as normal Pit, everything has been completely synced between the two.

All changes to the skeleton from the original Smash rig are applied on compile exclusively with QC commands, ensuring full compatiblity with animation imports.

Each model contains presets for many different facial expressions, phonemes, and various useful utility presets such as hand poses and blade locking. The hair, rings, and scarf tails are fully jiggleboned and should behave properly in any situation.

-Final Smash eyes and curry blush can be toggled on with flexes
-You can load the Smash 4 hair instead of the Ultimate hair with the hair bodygroup
-Switch between jiggleboned and non-jiggled rings with the rings bodygroup
-I highly suggest using the expression presets as a starting point for face posing
-Use the alternate skin groups on equipment to load Dark Pit's versions
-Weapons can be easily bonemerged into the hands, zero them with the animation set editor
-All animations have been edited to combine the left and right blades into one when necessary,
You don't really need to load the bow and dual edge models for them.
-Easily position the blades together for locking with the Bow and Dual Edge presets
-There are a few alternate versions of animations that determine the type of blade or item used
-Dark Pit's unique animations are labeled beginning with D_

Koichi 14 дек. 2019 в 10:03
We need this stuff on the garry's mod workshop. I am in dire need of these. I animate on gmod. My current computer doesn't have the epic gamer capacity to run SFM. I really need this into gmod. if you could do this for me. that would be stupendous. I currently am trying to create a youtube series which includes certain smash characters. If anybody (with the creators permission of course) Or the creator can port this to gmod, I would be very appreciative of this. thanks for reading.