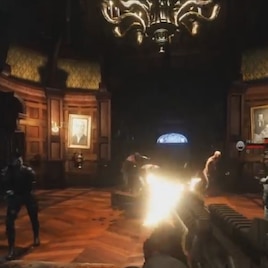 Basically, it is a PvP game type where the objective is to stay as human as long as possible. As humans die they join the zombie team and try to kill the rest of the humans. There are (by default) 6 waves that you have to survive, and the waves are progressed by time and not by how many zombies remain.

At start of game before first wave, the initial zombies are being picked for zombie team by the players closest to zombie spawnpoints (random zed spawn volumes get picked as spawnpoints for the map).
Also while at pre-game time, you can pick your initial weapon loadout (you are however limited by specific amount of weapons/items/traits you can select to start with).

The stock 'Trader pods' in maps are NOT usable in this game mode, but instead you have to select 'Trader pod' as initial weapon loadout, it is a small deployable trader pod which you can re-pack up at any time to move it around with you.

The gameplay revolves around building barricades to prevent zombies from getting close to you by using the physics props in levels, also remember to get the nailgun (from initial loadout or store) in order to nail them in place. Zombies can destroy the physics props by attacking them, you can use the Welder to repair the nailed down props.
You can pick up physics props by looking at it and press Use key (E). While carrying physics prop you can freeze it in place by pressing Sprint key, and hold down Alt fire to rotate it around with your mouse.
In order to walk through physics props you have to hold down Sprint key to enter phase mode.

As a zombie, if you manage to kill 4 humans, you will redeem back as a human (you'll start with speed traits and dual 9mm's and knife). It is your only way of turning back into a human again after becoming a zombie.

At end of the wave, the zombie that has dealt most damage (both humans and barricades) will be elected to become a boss zombie at beginning of next wave (at 10 seconds remaining mark).

In your HUD you will see a skull meter at bottom of screen, that meter will show the danger level in the area you are standing at, the higher the needle goes, the more zombies/powerful zombies are nearby. Also it is worth mentioning the zombies will receive damage resistance the higher the thread level is (up to 33 %).

As a human you earn dosh for:
- Killing zeds.
- Repairing barricades with welder.
- Taking no damage for a minute.
- Healing other humans.
- Other humans buying goods from your trader pod (5 % commission for each purchase they make).

The mod comes with a built-in bot support (although they are not that good).

BERTIE WORCESTER 1/jun/2017 às 3:59
Yeah would love to try this for my server but it crashes on solo at launch so it doesnt appear to work with latest patch. If there is a workaround please let me know Marco

๋ 28/dez/2016 às 14:39
Funny thing is, while this mode was heavily inspired by the gmod zombie survival mode which is a versus zombie mod as well, it is a lot better than the current survival mode for KF2 by the developers. It is more balanced than the official versus mode in KF2. You should feel proud.

Laces115 16/ago/2016 às 23:33
You wouldn't happen to be thinking about making something like this for KF1 would you? You have a pretty good bot mod in that game, and this would be so damn fun with that!