Greenlight > Games > iggy's Workshop
Greenlight is being retired. For more information on how to submit games to steam, refer to this blog post.
This item has been removed from the community because it violates Steam Community & Content Guidelines. It is only visible to you. If you believe your item has been removed by mistake, please contact Steam Support.
This item is incompatible with Greenlight. Please see the instructions page for reasons why this item might not work within Greenlight.
Current visibility: Hidden
This item will only be visible to you, admins, and anyone marked as a creator.
Current visibility: Friends-only
This item will only be visible in searches to you, your friends, and admins.
Crow
Description Discussions0 Announcements3 Comments277 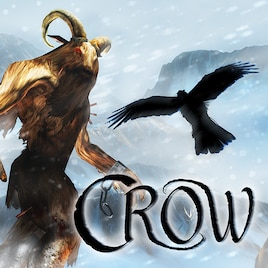 iggy
Online
See all 35 collections (some may be hidden)

View Crow in the store

Crow is on Steam! It will be available for download October 6, 2014!

Read More
Description
Release date: Immediate
Crow is the critically acclaimed, story-driven action-adventure developed by Sunside. Combining unique exploration, combat, and game mechanics, Crow takes the player on an exciting journey to faraway lands where an ancient battle is unfolding. Your choices will forever alter the course of this world. Will you Curse your foes or Spare them and risk the consequences?

Here's what reviewers have said about Crow
★ "It's rare to find such a compelling mix of 3D graphics, story and action-adventure gameplay" - Apple - Editor's Choice
★ "Crow is a game that beckons you to take a flight through the dark side in an adventure that lets you choose your own path." - PC Magazine
★ "Crow could be the greatest iPhone game I’ve ever played." - Kotaku - Gaming App of the Day
★ "Some of the best visuals the iPhone has to offer." - Appolicious Advisor - 5/5 Stars
★ "An Immensely Captivating Dark Adventure for iOS." - Mactrast.com - 4/5 Stars
★ "Crow's world is definitely one of the most compelling I've visited on iOS." - iFanzine - 4/5

Crow has been Greenlit and is now listed in the Steam store. For the latest information, purchase options, and discussions for Crow, please see it on the Steam Store or in the Steam Community.
Visit Store Page
For more details Visit Community Hub
For latest discussions
If you really, really want to, you can continue to the Greenlight page. Information on this page may be out of date, since all the action has moved to the areas noted above.