Greenlight > Games > dc ツ's Workshop
Greenlight is being retired. For more information on how to submit games to steam, refer to this blog post.
This item has been removed from the community because it violates Steam Community & Content Guidelines. It is only visible to you. If you believe your item has been removed by mistake, please contact Steam Support.
This item is incompatible with Greenlight. Please see the instructions page for reasons why this item might not work within Greenlight.
Current visibility: Hidden
This item will only be visible to you, admins, and anyone marked as a creator.
Current visibility: Friends-only
This item will only be visible in searches to you, your friends, and admins.
CreepTD - Multiplayer Tower Defense
Description Discussions0 Comments153 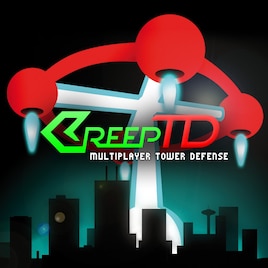 dc ツ
Offline
See all 17 collections (some may be hidden)
Description
Release date: Out Now
CreepTD - Multiplayer Tower Defense aims to combine all your favorite game modes of the Tower Defense respectively Tower Wars genre into a single title in a community effort. There is single player Survivor where you are free to select from three unique AIs on the difficulty level you like the most as well as a variety of multiplayer game modes for up to four players, including teamed up coop gaming. There are already over 100 maps to play and every single one is a real challenge. It's designed to run even on moderate computer hardware and is availabe for Windows, Mac, Linux and your browser. However, the best about it definitely is: It's free!

Basically the game is about finding the best compromise between attacking your opponents by sending creeps and defending your lives against incoming creeps by building defense structures (towers). At the beginning you get 200 credits, 20 lives to defend and an income per round of 200 credits. If a creep manages to pass through your game board completely, you will lose a life.

Sending creeps will cost some credits but will increase the income you receive with a new round. One round lasts 15 seconds and when a round is finished your credits will be increased by your current income. With this in mind, the best strategy is based on building as few towers as required and sending as much creeps as possible.

When defending, the rule is to place your towers at strategic locations, e.g. where they are able to hit incoming creeps as often as possible to deal maximum damage. On the other hand you have to select the right tower types for the right purposes, decide whether to build additional towers or to upgrade existing ones and later on adjust your towers' strategy settings to deliver best results.

When attacking you gain an advantage by good timing and selecting the most dangerous creep types depending on your oponents' defense setting. Sometimes it may be the right decision to send a wave of smaller creeps and another time there will be a big creep required to put your opponents under pressure.

Sounds simple, but believe me, it's all about the right strategy somewhere between defending and attacking to win the game! And of course, there is a lot of detail in placing towers at the right locations and selecting the best fitting tower attack strategy.

FunkadelicPeach Apr 27, 2020 @ 6:34pm
Just had a brief email conversation with the main developer of the game (dcode). This project will not be coming to steam in its current state, for those wondering. I guess there was some financial/copywrite troubles getting the title to come onto Steam. (source: Seraph07).

Dcode is currently working on web applications called AssemblyScript and WebAssembly. He hopes to bring CreepTD onto those platforms into a web based application sometime in the future. The current state of CreepTD remains on java as a download-only client, and is in a stable and balanced condition. There are no known updates to come to the java version any time soon.

Dcode had also mentioned that the reason CreepTD hadn't turned into a web application as quick, is because the community around the game had become "toxic". Not sure why there hasn't been any communication from him in regards to the state of the game, or the web applications. I am attempting to bridge that gap by leaving this comment.

Liridon Feb 2, 2017 @ 3:47pm
the best creeptd game ive ever played, alot of features, game modes, maps and it takes alot of skill to beat the map records or other players in different game modes!