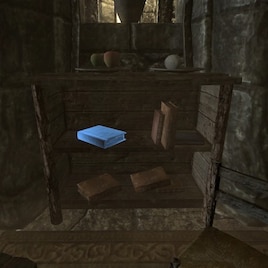 duggelz
Offline
See all 11279 collections (some may be hidden)

This item has been added to your Subscriptions. Some games will require you to relaunch them before the item will be downloaded.
Description
Unread Books Glow by duggelz

Books which you have not read yet will have a visible glow. When you read a book for the first time, its glow will disappear. All copies of the same title are considered the same book, so once you've read one "Cats of Skyrim", you've read them all.

* Unread books glow and have an "*" before their name
* Uses SKSE and SkyUI if installed, but doesn't require them
* Recognizes all books your character has previously read (SKSE)
* Tracks books from any mod or DLC
* Spell tomes are green, skill books are red, quest books and regular
books are various shades of blue
* Settings configured in-game via SkyUI or spell

Steam Workshop: Click the green "Subscribe" button. You may also need
to start the Skyrim launcher, click on "Data Files", and make sure
that "UnreadBooksGlow.esp" is listed and has a check mark in the
columns labeled "Load?" and "Subscribed?".

If you have SKSE[skse.silverlock.org] version 1.6.8 or better installed, several features
of this mod will work better. If you have SkyUI[skyrim.nexusmods.com] version 3.1 or better
installed, you can use the Mod Configuration Menu to access this mod's
options. Both are highly recommended.

If you're upgrading from a previous version, you might see odd
behavior until you enter a new location.

Move your character to an interior location that has no unread books.
Save your game and exit Skyrim.

* If you don't have SKSE version 1.6.8 or above, books you've read
before installing this mod are not recorded. You will have to read
them again.
* Only the nearest 100 books are affected in any location.
* Books in containers and merchant inventories are usually not
recognized as unread.
* Quest books added by DLC and other mods are treated as "plain" books.
Spell tomes and skill books should work fine.

If you have SkyUI installed, press "Escape", click on "Mod
Configuration", and then "Unread Books Glow". You will see a page
with various options.

If you do not have SkyUI installed, open the in-game "Magic" menu,
select "Powers", and select "{Unread Books Glow Settings}". Then exit
the menu. Your character will appear to have a spell readied. Cast
the spell as normal (usually just clicking the left mouse button) and
a settings menu will appear. It has less options than the SkyUI menu.

This mod should automatically handle books added by DLC and other
mods. However, there might be conflicts with other mods that change
the behavior of books in general. If you find something noteworthy
that does or doesn't work, let me know and I will add it here.

Maybe Compatible:
* Unlimited Bookshelves (works for some people, not for others)

Probably Not Compatible:
* Deja Vu - I Already Read It
* Mark Books as Read

This file is available on the Skyrim Nexus and the Steam Workshop.

This mod includes translations contributed by various helpful people.
You will need SKSE and SkyUI installed to see translations. I will
not be be using the older method of creating multilingual Skyrim mods,
because it's horrible. This means the "{Unread Books Glow Settings}"
power will always be in English. Other people may provide translated
.esp files, in which case I'll link to them from here.

Localization is tricky, and hard to test. Accent marks always seem to
get mangled one way or another. So if you spot an error, post a
comment and I'll look at it.

Translations for past and present versions of this mod were
contributed by the following people:

Any errors are likely to be mine, not the translators. Germans, you
must love Skyrim, four different people gave me five different
translations, so I went line by line picking the translation chosen by
the most people, and used Google Translate as a tie breaker.

Bethesda for the Skyrim Creation Kit.
Fallout Mod Manager (FOMM) for TESsnip and BSA Browser.
LHammonds Readme Generator.
The SKSE team for tireless work.
The SkyUI team for awesome improvements.
The Tes5Edit team for their tools.
The Skyrim Nexus for hosting.

Because i have to collect everything.
Rancid Milk

Captain Seasick Jun 9 @ 12:58am
I "fixed" the issue myself by downloading the mod from Nexus, but the problem still persists for the workshop version. No idea why.

duggelz  [author] Jun 8 @ 8:54pm
@CTMoo: There is no significance to the different shades of blue. It's randomly chosen for variety.

duggelz  [author] Jun 8 @ 8:45pm
@Captain Seasick: As far as I can tell, the mod is fine, except for the usual maddening random bugginess that the Steam Workshop has for various people at various times. If it doesn't work for you, let me know.

Captain Seasick Jun 8 @ 11:47am
So will you actually be updating this mod to fix the recent subscribing/loading issue? I mean, it's been reported since almost 10 months ago now...

CTMoo Jun 4 @ 8:27am
I really like this mod so far, especially for the color of skill books. But I'm a little unclear about the meaning of the different "blues" colors of the books. Is there a way to find out more specifically what some of the colors indicate?? I don't have or know anything about the SkyUI or SKSE mods. Thanks so much for this great mod!!

Agent QuidNinja Mar 16 @ 9:52am
LOVE this mod! Thank you so much for making this and making it available to the Skyrim community!

N7ShadowKnight Mar 2 @ 8:28pm
I just started on skyrim again today, and now its not working, i havent changed anything and i remember it working the last time i played it, am i missing something?