Store Page
SteamVR>  Workshop > Cargo Cult's Workshop
This item has been removed from the community because it violates Steam Community & Content Guidelines. It is only visible to you. If you believe your item has been removed by mistake, please contact Steam Support.
This item is incompatible with SteamVR. Please see the instructions page for reasons why this item might not work within SteamVR.
Current visibility: Hidden
This item will only be visible to you, admins, and anyone marked as a creator.
Current visibility: Friends-only
This item will only be visible in searches to you, your friends, and admins. 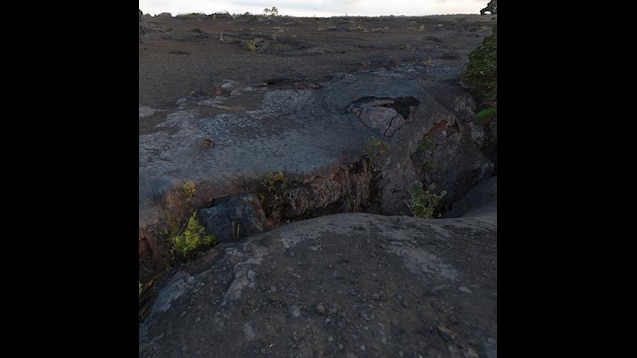 Cargo Cult
Offline
See all 9 collections (some may be hidden)

This item has been added to your Subscriptions. Some games will require you to relaunch them before the item will be downloaded.
Description
Captured in early April 2017, this lava field lies to the south-east of the active Kīlauea volcano, in one of its major rift zones. The large fissure is where molten lava recently spewed from underground; the landscape is now being recolonised by hardy ʻōhiʻa lehua trees.

Definitely shot in a hurry (less than 15 minutes - the minibus was about to leave) and in pretty challenging, super-contrasty conditions with the evening light progressively dying. Trees in the middle are even worse than usual (I think I had about three photos including them in their entirety) so please excuse that. Photos were more than a bit soft and smeary, but considering how hurried I was (a higher ISO and shorter shutter speed could have been an idea) it turned out not too badly.

Another produced-entirely-at-home effort. I've got the full workflow up and running, skydomes and all.

Audio is via Freesound.org, imitating the real thing roughly from memory. I'm sure the species of cricket will be completely wrong. Credits:

Both are CC0-licensed, but I'm crediting them anyway 'cause they're great.
< >
2 Comments