Store Page
7,62 Hard Life>  Workshop > Aspect's Workshop
This item has been removed from the community because it violates Steam Community & Content Guidelines. It is only visible to you. If you believe your item has been removed by mistake, please contact Steam Support.
This item is incompatible with 7,62 Hard Life. Please see the instructions page for reasons why this item might not work within 7,62 Hard Life.
Current visibility: Hidden
This item will only be visible to you, admins, and anyone marked as a creator.
Current visibility: Friends-only
This item will only be visible in searches to you, your friends, and admins. 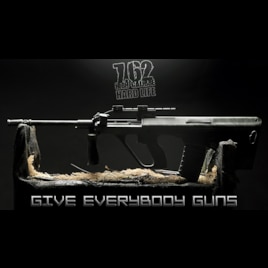 Aspect
Offline
See all 14 collections (some may be hidden)

This item has been added to your Subscriptions. Some games will require you to relaunch them before the item will be downloaded.
Description
GEG - Give Everybody Guns - Version 1.2 [Last Update: 2018/06/28]

1. DO NOT USE THE SNIPER CAMO FIX MOD! IT IS CURRENTLY INCOMPATIBLE AND WILL CAUSE THE GAME TO CRASH! GEG already fixes the sniper camo bug.

2. Please don't skip this step! Download this improved EXE file for more stability, especially when loading shops. This will improve the game stability, but there is no way to make this work from steam workshop, it needs to be a separate download.

After you download it, simply extract both the exe file and the "RenderedItems" folder to the main folder of your game; overwrite files when asked.

3. Activate the mod in Steam Workshop.

4. Start a >>>NEW<<< game. (no need to start a new game if simply updating from previous version of the mod).

5. Save frequently, i also recommend saving before opening shops.

-800+ new weapons, 35+ new calibers, as well as some new items; all of them integrated into the world, being used by enemies and sold by shops. Enemies now have much higher weapon variety, with bandits for example having over 130 variants for some CGLs, 10 times higher than in vanilla or HLA.

-Weapons have had their automatic fire accuracy changed. Depending on the caliber, size of weapon and other factors; with SMGs being much more controllable than higher powered rifles. This value is displayed on the description of the weapon. Battle rifles are worse than they originally were.

-Degradation and overheating of the ammunition is displayed on its description. Overpressure rounds are more degradable but yield better performance. There are some other high quality ammo or underpressure ammo that will yield lower performance, but will degrade the weapon less.

-Included option to change AR-15 stocks to any other telescopic stock. To do so, simply buy the item in the shops and change the stock of a compatible weapon. For those that cannot find these stocks for sale, there is one added in the rifles section of the orders in Cali Cantinos and in the army base. Thanks goes to gpgpgpgp for coding this feature.

-As of update 1.2, gpgpgpgp was kind enough to allow me to include his Looting Tweak in the mod by default. His mod allows looting directly from vests, belts and other LBE by right clicking, as well as dropping all items from an LBE when it is folded. He also included a script to combine 7 dynamite sticks into the big bundle of dynamites.

Visit our forum for more information and changelogs! You can also get a Non-steam workshop version in our forum, on the second post.

If you use "Examine Items" / "Inspect" action on container items (vests, etc), and before closing the "what's inside" window, you click "Fold" action, the window will be left open with looks like the items are inside. If you then operate with the window (clicking "X", etc) or any item inside, the game gets angry and crashes itself.

To avoid this, close window first or click "Finish Inspect" before clicking a "Fold" action.

If the window is already left open (by mistake), you can always let the window close itself by pressing ESC or "leave sector" or "show/hide inventory" key.

Ksilen Sep 13, 2020 @ 5:37am
A beautiful mod, really a lot of weapons, cartridges were added, but it's impossible to play, when you first come to Villarado, the game starts crashing every five minutes. Authors, reduce the number of weapons and better add new helmets and camouflages

SuperNiceGuy Sep 11, 2020 @ 3:17am
@GoldernSilver: Excuse me, I've just made 2 new mod for this game, but I don't know how to make the mod install to the game after click Subscribe, right now, after subscribe my mod, I have to go to the workshop folder and copy paste the data to main game folder

I have tried to find the document/tutorial about upload 7,62HL mod to workshop but there is none. It would be nice if you can have me.

Yes enemies will attack with pistol at the start, unlike the airsoft fals in normal HLA.

SuperNiceGuy Sep 2, 2020 @ 5:53pm
Crashes when fold the belt. Also all the enemy whose attack the camp in the first game only armed with pistol