Store Page
Arma 3>  Workshop > Sovjet's Workshop
This item has been removed from the community because it violates Steam Community & Content Guidelines. It is only visible to you. If you believe your item has been removed by mistake, please contact Steam Support.
This item is incompatible with Arma 3. Please see the instructions page for reasons why this item might not work within Arma 3.
Current visibility: Hidden
This item will only be visible to you, admins, and anyone marked as a creator.
Current visibility: Friends-only
This item will only be visible in searches to you, your friends, and admins. 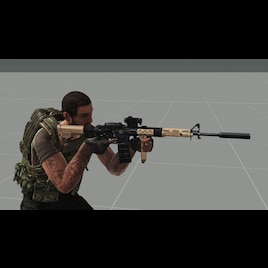 This item has been added to your Subscriptions. Some games will require you to relaunch them before the item will be downloaded.
In 1 collection by Sovjet
COLT C7NLD/C8NLD COLLECTION

Description:
Finally, after months of work, we are proud to release the mod to the public. We tried to make our mod as realistic as possible, on most aspects we achieved that! But on some minor points we took the liberty to change a few things :)

This is our first release ever for Arma 3, so expect some minor bugs. Please report these bug(s) to us so we can investigate it and make a fix for it. We are with only 2 people, so it could take a few days before you’ll get a response or a fix.

The attachments are made specific for these weapons, so they may work on other weapons, but it is not supported.

We won't support the ASDG Joint Rails mod, this because the attachments and the weapons are crafted specifically for this mod. As stated above.

Features:
We have several versions and features. We added a few extra Colt C7 and Colt C8 Special Forces skins.

Installation:
Subscribe to the mod in the Steam Workshop and make sure the mod is enabled in the Arma 3 Launcher.

Also check if you have setup the correct bindings for the MRT functions (CBA_A3). Otherwise the magnifier won’t be usable!

One of our members has created a video in case you have problems with the key bindings.

Credits & Thanks:
I would like to say thanks to some people:

First, I would like to thank my testing rabbits, for their support and testing in the last few months!
Thanks to the 11th AMB Dutch Arma 3 community[11thamb.com] for their beta testing.
And finally, thanks to Bohemia Interactive[www.bohemia.net] for their wonderful game.

Disclaimer:
We are not responsible if something happens to your game/system when installing/using this addon!

This mod is meant for ARMA 3 by Bohemia Interactive. Any commercial or military use is strictly forbidden without explicit permission by the author.

Editing or redistributing the mod without explicit permission by the author is forbidden. Thus, making any commercial gain is NOT allowed by renting/leasing, selling of the mod.
< >
94 Comments

implicitjay Jul 6 @ 10:11am
This is a great mod. But how do you use the scope magnifier found on the Colt Canada C7/C8?

Sadly, at this moment we do not support modding with this model. That might change in the future, depending on the ArmA franchise.

Carkidd Feb 23 @ 5:23pm
I'd like to ask you about possibly using this model for a mod for a different game, name, Hotdogs, Horseshoes and Hand Grenades. It's one of the best C7NLD models out there!

Sovjet  [author] Jul 25, 2020 @ 4:12pm
We (the developers) have found some spare time, we will be working behind the scenes on new stuff and give the colt a much-needed update(s).

Sovjet  [author] Jul 3, 2020 @ 11:08pm
Thanks for the question Pvt. Shinks, however this mod has had it last final update for the near future. So the chance that Ace Compat will be added is quite small. We are waiting for Arma 4 to get back to modding.

Sovjet  [author] May 9, 2020 @ 7:48am
Maybe in the (near) future, at this moment I'am very busy with work and such. If we pickup this project again, the title will change in active development

And I'm waiting for Arma 4, if that's ever gonna happen