Store Page
Team Fortress 2 >  Workshop > E-Arkham's Workshop
This item has been removed from the community because it violates Steam Community & Content Guidelines. It is only visible to you. If you believe your item has been removed by mistake, please contact Steam Support.
This item is incompatible with Team Fortress 2. Please see the instructions page for reasons why this item might not work within Team Fortress 2.
Current visibility: Hidden
This item will only be visible to you, admins, and anyone marked as a creator.
Current visibility: Friends-only
This item will only be visible in searches to you, your friends, and admins. 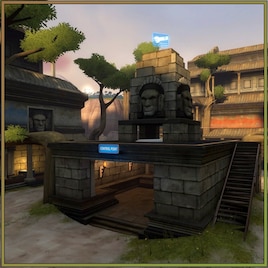 E-Arkham
Offline
See all 49 collections (some may be hidden)

This item has been added to your Subscriptions. Some games will require you to relaunch them before the item will be downloaded.
Description
A five point control map set in the ruins of Cambodia.

Antiquity is a map that began shortly after the Artpass Contest in 2010, making it seven years old. And what a change those years have brought...

Check out this comparision page[antiquity.necrotalesgames.com] for the most recent changes!

b4nny - for taking the time to walk the map on twitch and give feedback which was used to update to b16
Acumen - The drill model on the old version (removed as part of cleaning up last)
The TF2maps Community
Previous versions: cp_antiquity_b15, cp_antiquity_b16, cp_antiquity_b17

nightlife Jan 12, 2021 @ 3:25pm
Hello I'm currently running this map on my dedicated community server. with the latest bot detection and anti-cheat software. Save the headache of bot spam in casual and play here!
type connect 66.55.79.30 in the in-game console to join the server!

E-Arkham  [author] Jul 26, 2017 @ 12:09pm
Updated to B18. If you experience any framerate issues, please screenshot the area and post it in the comments or in the discussions section. Thanks!

ICS Jul 23, 2017 @ 3:08am
Noticed this little hovering pallet while i was running around the map and thought i think you may have not noticed it. Same thing on both sides. http://steamcommunity.com/sharedfiles/filedetails/?id=1087115634

E-Arkham  [author] Jul 12, 2017 @ 12:04am
I've stayed up late to double check this: the map simply does not render enough for framerate to be a serious issue. Please ask your server owner to delete whatever version they have and install the latest version, B17.