Store Page
Arma 3>  Workshop > Crazy Mike's Workshop
This item has been removed from the community because it violates Steam Community & Content Guidelines. It is only visible to you. If you believe your item has been removed by mistake, please contact Steam Support.
This item is incompatible with Arma 3. Please see the instructions page for reasons why this item might not work within Arma 3.
Current visibility: Hidden
This item will only be visible to you, admins, and anyone marked as a creator.
Current visibility: Friends-only
This item will only be visible in searches to you, your friends, and admins. 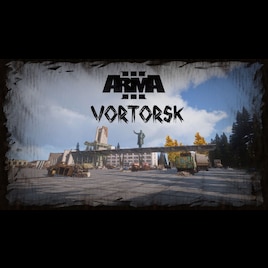 Crazy Mike
Offline
See all 126 collections (some may be hidden)

This item has been added to your Subscriptions. Some games will require you to relaunch them before the item will be downloaded.
Description
-This map has been discontinued

Please use with caution, many aspects of the current landmass under construction are being constantly developed and changed, the finished product will not begin to fully take shape until many months into the future, if not longer.

Welcome to my first ArmA terrain release, Vortorsk. As of posting 6/27/17 this map has been in development for roughly 2 months since learning ArmA modding tools, and will be continously developed for the foreseeable future. This terrain is fictional and loosely based off of the shape of my home state in the U.S.A. Please keep in mind this terrain will have frequent updates as I continue to expand upon it, most finished terrains take damn near years of development, I am pushing onward fast but don't get greedy on updates either, my current plan as of the above mentioned date is to completely finish and flesh out the southern main island, and touch on all minor islands, then slowly work north to the two northern islands. The file size is bloated due to the inclusion of CHZ addons, you will just have to deal with it. There is no set date for all of this as I am working unpaid with no deadlines, thus updates may be swift or they may be slow, thanks for checking it out!

Lore:
The island is located in the Sea of Okhotsk, and has been abandoned for many years since the fall of the Soviet Union, after losing the support of the USSR the micro-nation Vortorsk fell into disarray, it began slowly bleeding its population. 6 months later in June 1992, an event occurred crippling the nation and killing off a majority of the remaining population. Many attempted to flee the island by boat or plane, but most civilians were forced to stay on the island, eventually succumbing to something or another... The major cities on the island have since fallen into decay and have begun to fall apart, nature is slowly taking back the cities but due to the harsh climate in the Sea of Okhotsk, it has been a slow process. Many civilians had fled underground in one of the many locations below ground level on the island, making for good hiding spots and terrible dead ends. The military of Vortorsk was not prepared for the events of 1992 and fell apart within months, leaving scattered supplies across the island from lost patrols, deserters, and worse. With the current state of the island, not much is stopping anybody from getting to the island, but it has been all but erased from maps and made difficult to find, be warned however as only rumors circulate as to what really happened, seeing it firsthand may give you a clear picture of what happened, but it may also give you a very clear fate. Paramilitary forces have also been said to operate off the island as it is essentially lawless there and there are almost no living inhabitants on the island, or atleast, normal inhabitants. There have been some incursions onto the island ordered by the Russian Military but all of the expeditions ended horribly, thus the island was quarantined and forgotten. Some however remember, some attempt to find the island, fewer actually do, and so far, none have returned.

Special Thanks:
ArmanIII - Without his allowing me to use his work from CHZ, I would have not started this project, thanks!!!
GSC Game World - S.T.A.L.K.E.R Game series which was in part inspiration to start this project aswell as allowing non-commercial projects such as this one to use their game assets from the series.
Popular Discussions View All (2)

Crazy Mike  [author] Sep 16 @ 10:37am
this mod is dead, i got overwhelmed as this was my first time making an actual mod and ended up losing motivation, i also was running servers at the time and everytime i tried to host on a map other then chernarus the new server would die quickly and everybody would just go back to chernarus, which didnt help my motivation

Crazy Mike  [author] May 1 @ 12:05pm
well yea taviana was a great map and this was suppose to be a direct clone but i started this with absolutely zero experience so it was looking pretty bad so i scrapped it

Ofcourse :) It is your work, I thought that these lands have a lot of potential. :)

Crazy Mike  [author] May 1 @ 12:02pm
although i might use this in the future myself for some other project

Crazy Mike  [author] May 1 @ 12:02pm
what i DO have is an overhauled heightmap and mask image i was playing around with awhile back and that data could be used to easily restart the project if you want from scratch https://gyazo.com/8bedec389302fc32b07cd004e4c49e1d

Crazy Mike  [author] Apr 29 @ 5:23pm
if you can reverse engineer the data on the workshop here go for it, source files are long gone

The Paramedic Apr 29 @ 2:28pm
@Crazy Mike, Am I allowed to work on this map and make something out of this? :)
If you want I can give you a note on the page?

Let me know what it is, feel free to add me on steam aswell if you have any questions or you want to talk about it. :)
< >