Greenlight > Games > Wee Free Studio's Workshop
Greenlight is being retired. For more information on how to submit games to steam, refer to this blog post.
This item has been removed from the community because it violates Steam Community & Content Guidelines. It is only visible to you. If you believe your item has been removed by mistake, please contact Steam Support.
This item is incompatible with Greenlight. Please see the instructions page for reasons why this item might not work within Greenlight.
Current visibility: Hidden
This item will only be visible to you, admins, and anyone marked as a creator.
Current visibility: Friends-only
This item will only be visible in searches to you, your friends, and admins.
Powargrid
Description Discussions0 Announcements10 Comments89 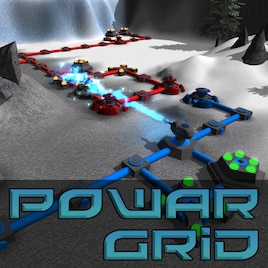 View Powargrid in the store

All campaign missions are fully playable! Still some missing dialogs and placeholder pictures, and loads of small stuff, like adding more achievements, testing, tweaking the difficulty... Still, progress is definitely being made!

Hiya! Wanna help us out? If you follow Powargrid on Playfield.io, we could win a chance to show Powargrid at Gamescom, the biggest games expo in the world!

Just head over to our Playfield page[playfield.io] and hit "Follow"! It's also a good way to keep an eye on any new screenshots we post. We've been working on a couple of new levels, so go and have a look!

Read More
Description
Powargrid is a turn based strategy game that plays like a board game... with explosions! The goal is to destroy your opponent's power plants and protect your own.

Strike a balance between attacking, defending, and building your economy to control the board. Blast your opponent with shockwave towers or strike them from afar with the lightning cannon. Construct additional power plants to boost your power economy and extend your reach with substations. Is the situation looking exceedingly grim? Overcharge your power plants for a last ditch defense or a surprise attack!

In the story driven campaign, you will take on rival factions as a recruit in the Blue Blobbie army. Get shouted at by your lovable Commander Grak, face down Hero Archeologist Ford of the Red Blobbies, take on the mad green Zealot Zomg, and thwart the schemes of Chairman Swap of the Grand Yellow Blobbie Corporation. And rumors say that's not all...

Powargrid is still in development, but you can play the latest alpha version online at www.powargrid.com. It includes the first few campaign missions, skirmish mode, and two player online multiplayer.

And of course we'd love to hear from you, either through the comments below or by dropping us a line on our site. Comments, bug reports and general encouragements are very welcome!

Once Powargrid is finished, we'd love to sell it through Steam (good reason to put it on Greenlight eh?) We'll also keep part of it available for free. This demo version will contain a couple of campaign missions, the basic skirmish AI and, more importantly, it can be used to join multiplayer games. With the full version you'll be able to host games, so you can always play against your friends even if they only have the free version. For the full campaign, we're aiming at 15 to 20 missions.

Anyway, that's what we have to tell about our game. If you haven't played it yet, feel free to give it a try at www.powargrid.com. If you like it, be sure to upvote Powargrid and add it to your favorites. As mentioned, we'd love to hear what you think of the game and especially what you would like us to do more of or less of. You can find out more on our website and blog.

“Genuinely fun: one of the best grid-based tactical experiences I’ve had since chess.”
Independent Gaming (indiegraph.wordpress.com)

"It's a great game and a great new take on the turn based strategy genre."
Alpha Beta Gamer on Twitter
< >
89 Comments

Wee Free Studio  [author] May 31, 2014 @ 11:13am
Thank you Luft0nat0r! Sorry everyone, been a bit quiet here. For regular updates, check our blog [www.powargrid.com] or follow us on Twitter or Facebook [facebook.com]. We do read and appreciate all your comments!

Powargrid has been Greenlit and is now listed in the Steam store. For the latest information, purchase options, and discussions for Powargrid, please see it on the Steam Store or in the Steam Community.
Visit Store Page
For more details Visit Community Hub
For latest discussions
If you really, really want to, you can continue to the Greenlight page. Information on this page may be out of date, since all the action has moved to the areas noted above.