Store Page
RimWorld>  Workshop > lbeaston's Workshop
This item has been removed from the community because it violates Steam Community & Content Guidelines. It is only visible to you. If you believe your item has been removed by mistake, please contact Steam Support.
This item is incompatible with RimWorld. Please see the instructions page for reasons why this item might not work within RimWorld.
Current visibility: Hidden
This item will only be visible to you, admins, and anyone marked as a creator.
Current visibility: Friends-only
This item will only be visible in searches to you, your friends, and admins. 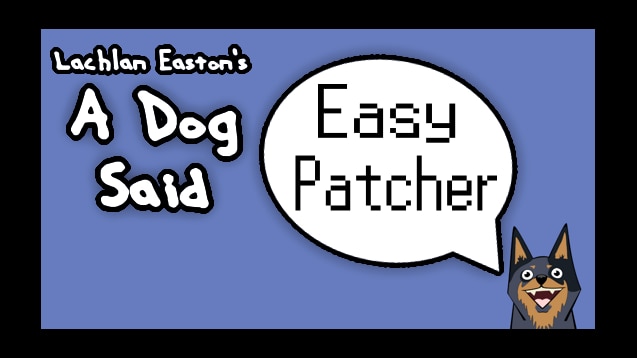 lbeaston
Offline
See all 2654 collections (some may be hidden)

This item has been added to your Subscriptions. Some games will require you to relaunch them before the item will be downloaded.
Description
Normal users need only load this mod after A Dog Said (Regular, Lite, Or No Crafting) - N.B. It will only affect mods that have added support for the easy patcher.

This mod adds an easy non-invasive way to add A Dog Said compatibility to animal mods.
It negates the need to have a seperate patch mod for every animal which stops ADS patches overriding each other.
It won't break games for users without this mod.

If a user has A Dog Said and A Dog Said Easy Patcher then that animal will automatically become A Dog Said compatible!
But what if a user doesn't have the easy patcher installed? No problem! Unused XML attributes won't change anything. The animal will still work perfectly (they just won't be able to install peg legs on it)

Should be compatible with Regular, Lite, and No Crafting versions of A Dog Said.
Should work with animals with vanilla body types. May work with custom bodies as long as they have all the standard organs. Now also supports animal healing.
If you run into any bugs or have any issues post a comment and I'll try to fix it as quick as possible. -- If you want to get a hold of me faster you can message be on Twitter @LBEaston or contact me on GitHub https://github.com/LakeByTheWoods/ADogSaidEasyPatcher
< >
169 Comments

Chiyo Apr 2 @ 8:46pm
Hi, I have a new mod that I like called Milk Dragon, but I'm not sure if the patcher is working because I can't seem to replace their body parts with prothstetics.

Sapphira D (Dracovian) Mar 3 @ 1:09pm
@Dominus-kun preferable after the animal mods. you can look into Rimpy for modsorting it has a way better algorithm then modmanager

Dominus-kun Feb 6 @ 7:46am
Hey, i just wanted to ask where to put A dog said and the patcher. Before all the animal mods or after them ?

Sapphira D (Dracovian) Jan 14 @ 3:05pm
i am trying to patch a mod for myself and is this the line which i need to edit
<ThingDef ParentName="AnimalThingBase" Name="OriBase">?

its the first thing atop that i can see that defines a new animal type. am i right though?

JACK Sep 14, 2021 @ 10:17pm
@Frigglish animal farm taught us that a wing is an ambulatory limb and is therefore countable as a leg

Frigglish Jul 7, 2021 @ 7:12am
Okay, I give. I've been neck-deep in the XML files for this and ADS, and using different formats (RecipeUsers lists vs. XML attribute added to Def) isn't helping, but... I give.

What ADogSaidBody do birds use? Just Legs, since Arms are only for primates now and they don't have relevant tails? What about seals and walruses? Are those legs or tails?
< >