Store Page
Tabletop Simulator>  Workshop > radchadgooey's Workshop
This item has been removed from the community because it violates Steam Community & Content Guidelines. It is only visible to you. If you believe your item has been removed by mistake, please contact Steam Support.
This item is incompatible with Tabletop Simulator. Please see the instructions page for reasons why this item might not work within Tabletop Simulator.
Current visibility: Hidden
This item will only be visible to you, admins, and anyone marked as a creator.
Current visibility: Friends-only
This item will only be visible in searches to you, your friends, and admins. 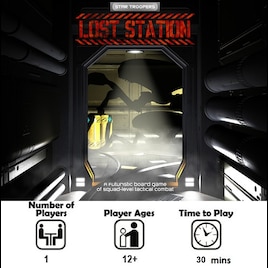 radchadgooey
Online
See all 4 collections (some may be hidden)

This item has been added to your Subscriptions. Some games will require you to relaunch them before the item will be downloaded.
Description
Sign, they said. You'll see the stars, live adventures, make a name for yourself!

They always forget to point out one thing: when you're a mercenary in one of these private armies working for a transstellar conglomerate, you spend more time keeping an eye on a staff who works on stuff you don't twig a thing about than seeing any real action. Especially when you're assigned to an isolated outpost so far from any regular spacelines that it took two months for your ride to bring you there...

And a weird station for sure. Just a few days after your arrival, barely the time necessary to learn your way from the dormitories to the security office and nothing more, rumors already abound about the project developed here: some sort of biological weapon, a new species of artificial fauna built to ensure the supremacy of your employer's client for all the corporate wars to come.

Or, for short, something completely illegal according to every law in the known universe...

But no opportunity to ask questions, all the more as you could guess the answer in advance, because a siren suddenly yells the red alert. The one which means a containment breach occurred and whatever was in development here is now on the loose.

As a same man, your squad equips and exits the security office: behind the door, you see only darkness and just hear screams of panic in the distance, echoing along the corridors of the station.

There is only one way to survive this situation: reach the shuttle bay and escape.

But where's this shuttle bay already?

A game by Guilhem Bedos


This project is designed for the 2017 Solitaire Print and Play Contest.